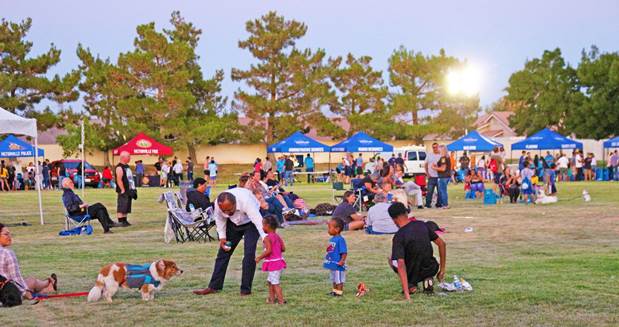 The City’s Rock the End of Summer PopUp at Eagle Ranch Park featured a Touch-A-Truck, Doggie Fashion Show and Concert in the Park with local band, Impakt.

More than 800 Eagle Ranch neighbors attended the event where they were treated to free refreshments, yard games, a water slide, prizes, fire truck hosedown from the Victorville Fire Department, and much more.  Residents were also invited to view vehicles used by the City’s public safety and public works crews.

The City of Victorville organized this fun, family event as part of its renewed goal to get out in the community and better connect with residents.  City staff manned the yard games and shared information about City services with those in attendance.

An estimated 700 neighbors attended the City’s first-ever Neighborhood PopUp at Brentwood Park on June 8 that featured a Bark in the Park and Movie in the Park.

The City plans to hold additional PopUps, most likely as a series next Spring/Summer.  Who knows, the City of Victorville may just PopUp in your neighborhood next!