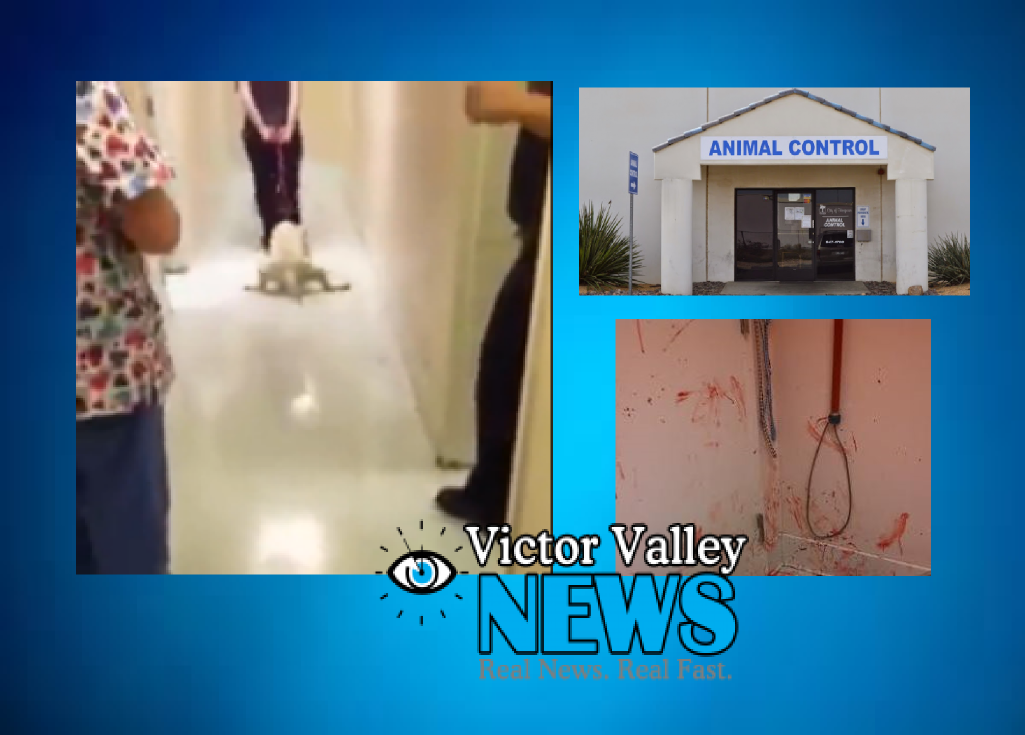 HESPERIA-(VVNG.com) After the now viral bloody dog photo, that was provided exclusively to Victor Valley News, the Hesperia Animal Shelter is again speaking out.

In a statement issued via a press release on May 14th read,

Today it was discovered that the photo was not a recent photo but was taken in 2013. A graphic photo was posted to social media on Tuesday, May 12, 2015 that appeared to have been taken at the Hesperia Animal Shelter.

Those from rescues and other animal advocates believe that this is again an attempt at playing the blame game or to sway attention elsewhere. The city  also claims it was shared by a “disgruntled worker”.

Regardless, disgruntled or not, most wonder if this makes what was captured in the photo or on the video any less disturbing or if it only proves that this type of behavior has been an ongoing problem.

“The whole staff there knew and knows what’s going on. They keep saying that the pictured was posted by a disgruntled employee that was fired. What difference does that make? You can clearly see that the dog was abused and then killed.  I’m sure this is common practice. They should have handled it differently. The dog lost control of his bowels, that shows that the dog was frantic and the tongue biting? I was told that is totally not something a dog would do,” said Animal Advocate Stephanie Lonsdale.

Since the press release came out, again fingers are being pointed and the question from the city remains, “who shared this?” and not “who took part in this bloody occurrence or why would it even happen”.

The person allegedly responsible for what was captured in the photo and in the dog dragging incident is also believed to be going back to work at the shelter soon.

“Until the photo was made available online, the city had no knowledge of an incident having taken place. Information about the incident will be shared with the public as it becomes available,” the statement from the city continued.

Some are satisfied with the cities answer and ask how it can be confirmed what was actually taking place on the photo. Some even asking if it could be a dog the city impounded following a dog fight.

Although it is confirmed by city officials that the photo appears to have originated from the City of Hesperia animal shelter, they are asking why it was not reported.

“The city’s response of they were not aware is not sufficient, why were they not aware? Whose responsibility is it to make them aware? The news? The citizens?  The scared employees?  Who? They need to realize they need to be held accountable for the actions of the people that they employee,” said Kimberly LeBrun McDermott an animal advocate.

Although it is known that a shelter is not the “Disneyland” for animals and despite the fact that many times poor pet care, not spaying or neutering or even breeding can cause shelter overcrowding the majority just can not fathom a reasonable explanation for what was captured in the photo.

“Everyone needs to SPAY AND NEUTER their pets….so many die! They die scared and alone! I hate the backyard breeder just as much as bad AC employees!” said Sheryl Laurito Stratton.

The city of Hesperia ended the press release by saying, “The City remains committed to providing humane treatment to all animals cared for at the Hesperia Animal Shelter.”

On Friday, May 15th at approximately 4:30 P.M., moments after this article was published a new update regarding the controversial photo was made via the City of Hesperia Animal Shelter Facebook Page:

Update on inquiry into graphic animal photo: the City conducted an internal inquiry to determine the origins of the photo published online on 5/12/15, seeking specific information related to the incident. On 5/14/15, the City disclosed to the public that the photo was taken in 2013. Based on information discovered through our internal inquiry, we have determined that it is now necessary to turn this matter over to law enforcement for a criminal investigation.

Because an investigation into staff conduct and shelter procedures was recently concluded based on an incident in February 2015, the date of the photo may be important. The date of the photo, however, does not make the image any less disturbing.

The City is prepared to cooperate fully with law enforcement officials in their investigation. The City remains committed to providing compassionate care to the animals at the Hesperia Animal Shelter and to finding families for homeless pets.

No End in Sight for Hesperia Animal Control Investigation