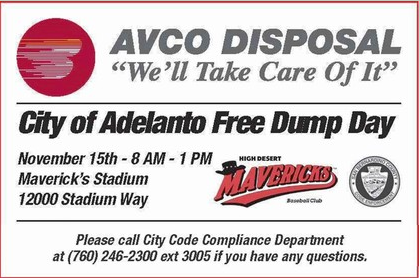 ADELANTO – (VVNG.com): The city of Adelanto, in order to prevent illegal dumping, is providing the city residents with a free dump day on Saturday, November 15th from 8:00 a.m. until 1:00 p.m at Maverick’s Stadium located at 12000 Stadium Way in Adelanto. During this time the city will be accepting items such as TV’s, Computer Monitors, electronic waste, tires from passenger vehicles (off the rims), metal appliances, toilets, mattresses, furniture as well as other large items.

No Hazardous waste will be allowed and those dumping must be residents of Adelanto with a water bill and valid photo ID. “While residents have the option, at no cost, to have items picked up by the waste hauler, many still chose to dump in the desert and we need to curtail this.” said Adelanto City Manager James Hart in an August interview.

The city is working together with the waste disposal company is hoping to make this joint effort create a cleaner environment for all Adelanto residents. Residents are asked to bring their water bill and photo ID as proof of residence.

There is no restrictions on the amount of trash taken in, it is encouraged that residents take advantage of this proactive city event.. Volunteers wanting to beautify their city can also be involved by loading up trucks of trash that has already been illegally dumped by others. “Groups getting together to clean up certain areas is encouraged and will be greatly appreciated.” added Hart.