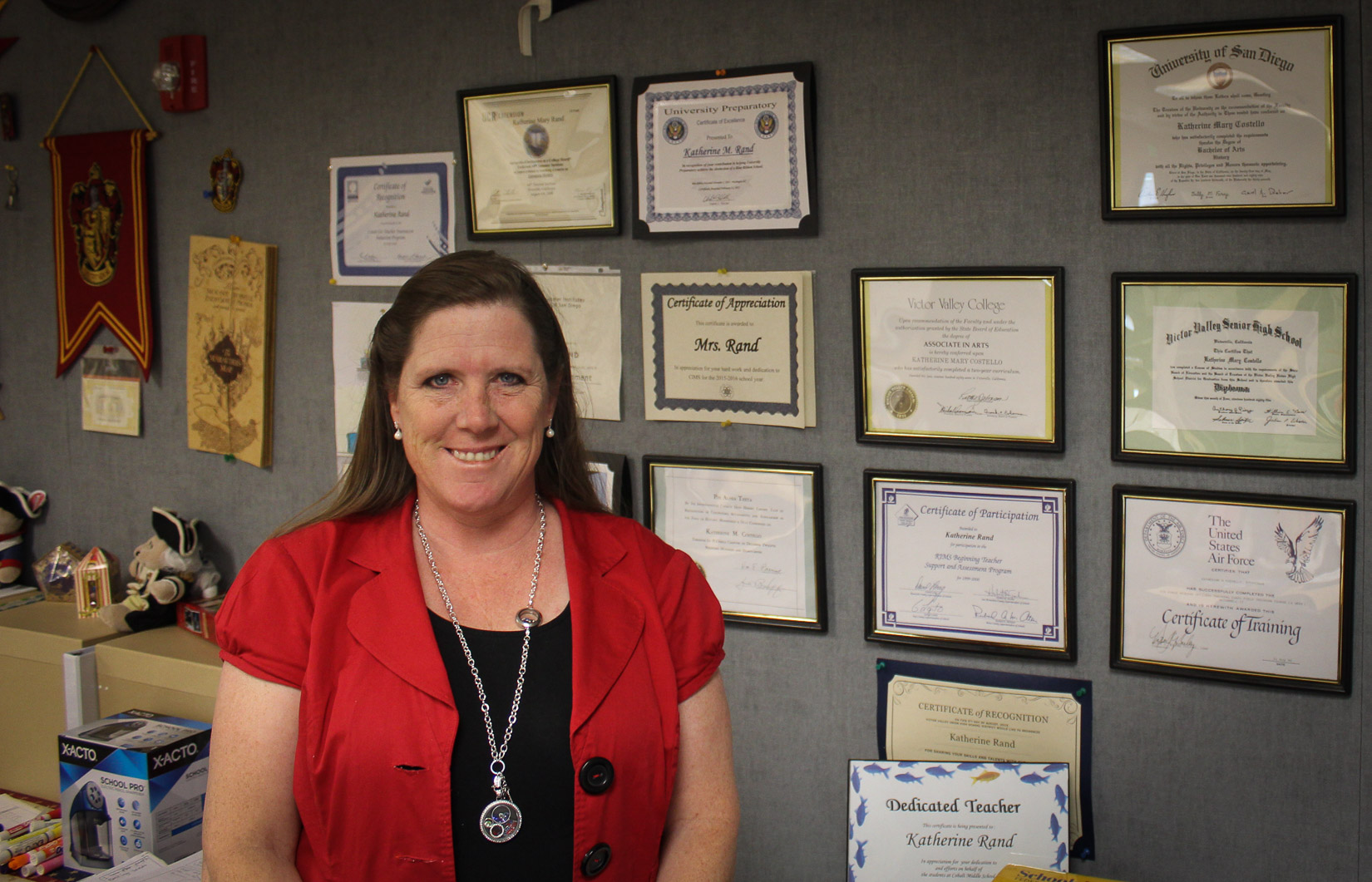 VICTORVILLE, Calif.(VVNG.com)- Katherine Rand has been teaching for more than two decades, but when she talks about education she still has the enthusiasm of a college freshman.

That enthusiasm inspires Rand’s Cobalt Institute of Math and Science colleagues, who nominated her for the Inland Empire Council for the Social Studies Teacher of Excellence award she recently won.

Though appreciative of the award, which will join the many plaques and certificates hanging above her desk, Rand says “the best reward I’ve gotten in teaching is the feedback from my students.”

Some of those students contact her years later to let her know how they’re doing.

“I look at my success as their success,” Rand says.

Rand, who currently teaches government and U.S. history at CIMS, has taught in the Victor Valley Union High School District since 1994 and graduated from Victor Valley High School in the 1980s. She credits her teachers at VVHS for inspiring her to enter the profession.

“It’s their fault that I do this,” she said with a laugh.

In particular, she mentioned former VVHS teacher George Struebing, saying she “loved the excitement he had everyday for being in the classroom.”

While still in high school, she was already taking community college classes with the aim of becoming a teacher, and she told school staff at the time that she would return to Victorville to teach at her alma mater. After attending the University of San Diego (with graduate work at San Diego State and Chapman), she did just that.

“I thought it was important to give back to my community,” Rand said. “I was going to give back four years, and I never left. I had family connections here and it was a good place to raise my son.”

Her fellow CIMS social studies teachers Antonia Vignocchi and Angela Powers nominated her for the award from the IECSS, a professional organization for social studies educators in San Bernardino, Riverside and eastern Los Angeles counties.

Powers, who has taught in the district for two years and has been a teacher for six years, marvels at Rand’s work ethic and dedication to her craft.

“Katherine is usually here before everybody else and leaves after everybody else,” Powers said. “She’s always looking for new ways to authentically engage the students.”

Rand feels the same about her colleagues — and she relishes the opportunity not only to teach, but to learn.

“I feel absolutely fortunate to get to work with the teachers I see every day,” Rand said. “We learn things from each other. I feel really fortunate that I’ve been able to do that.”