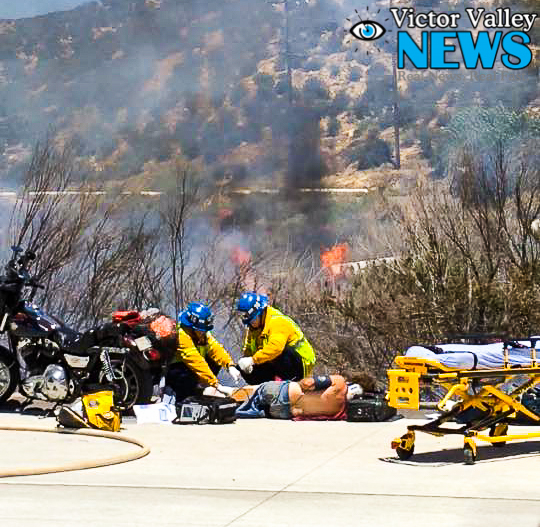 At about 12:38 p.m. according to the CHP, a motorcycle rider identified as 46-year-old Harry William Kuenniger of San Bernardino was traveling on the northbound I-15 approaching SR-138. Kuenniger, who was on a 1985 Harley Davidson in circumstances still under investigation was involved in a multi-vehicle traffic collision.

One vehicle involved in the collision was a multi-passenger coach bus. Kuenniger sustained major injuries as a result of the traffic collision.

CHP personnel arrived on scene to provide medical aid to the downed motorcyclist. While aiding Kuenniger, the female CHP officer was injured by an oxygen tank that was being utilized to provide aid.

For unknown reasons the oxygen tank exploded and the CHP officer sustained third degree burns to her face and arms.

Additional emergency personnel arrived on scene and assumed aid of Kuenniger subsequently transporting him to Desert Valley hospital with major non-life-threatening injuries. The CHP officer was also transported to a local hospital for treatment.

During the chaos of the traffic collision and subsequent injury of the CHP officer a brush fire erupted and began to spread. The firefighters quickly responded and contained the 10-acre fire. The CHP said that a short time later, a spot fire started as a result of the original fire dubbed as the “Scales Fire”

This collision and original cause of the fire are under investigation.