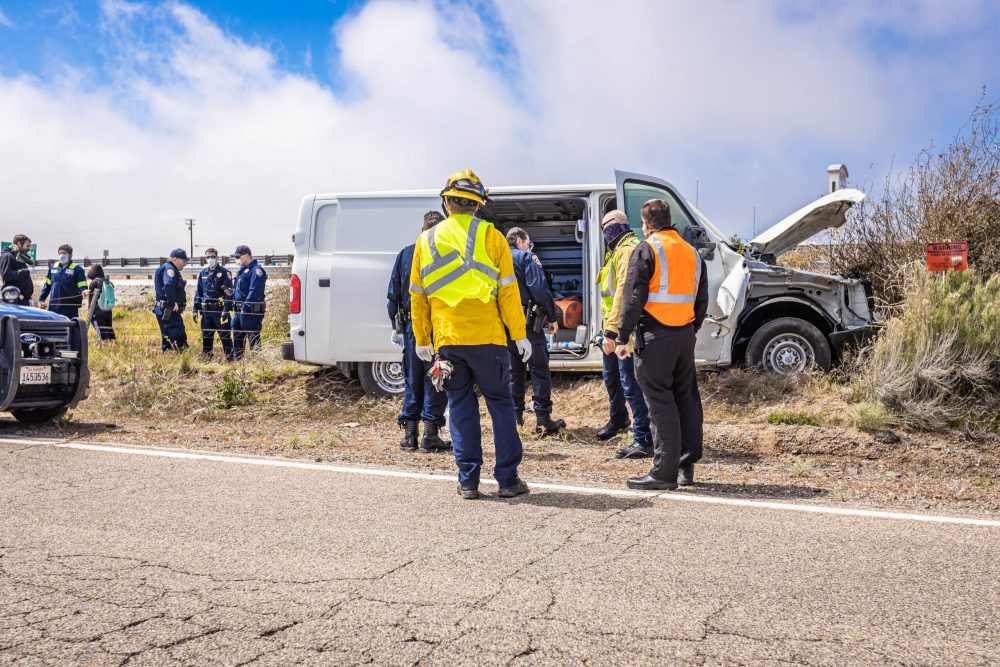 At about 1:15 pm, on April 12, 2020, San Bernardino County Fire Department was dispatched to reports of a crash with fire on the northbound 15 freeway between Oak Hill and Ranchero Roads.

When emergency personnel arrived they found the van off the freeway and along Mariposa Road with major front-end damage. The driver was not in the vehicle.

CHP logs indicated that the driver of the van was attempting to flag down drivers while standing in the #2 lane of traffic. CHP arrived on scene and detained the driver.

County Fire Battalion Chief Bill Mahan told Victor Valley News the driver of the van caught his clothing on fire, including parts of his hands and legs.

“There was some flammable chemical container visible from the outside sitting on the seat,” stated Mahan. “It sounds like he jumped out of the vehicle before putting it in park so it went off the freeway and on Mariposa Road”.

Mahan said that due to thick fog near the top of the Cajon Pass the patient was transported by a county ambulance, instead of a helicopter to the burn center at Arrowhead Regional Medical Center.

“A passerby tow truck driver used his extinguisher on what was left smoldering in the van and you could see burn marks on the driver window and a melted steering wheel,” stated Mahan.

According to Mahan, an investigator would interview the driver. The incident is under investigation by the Victorville CHP and anyone with information is asked to call 760-241-1186.

Related Topics:15 freeway crashCHP
Up Next