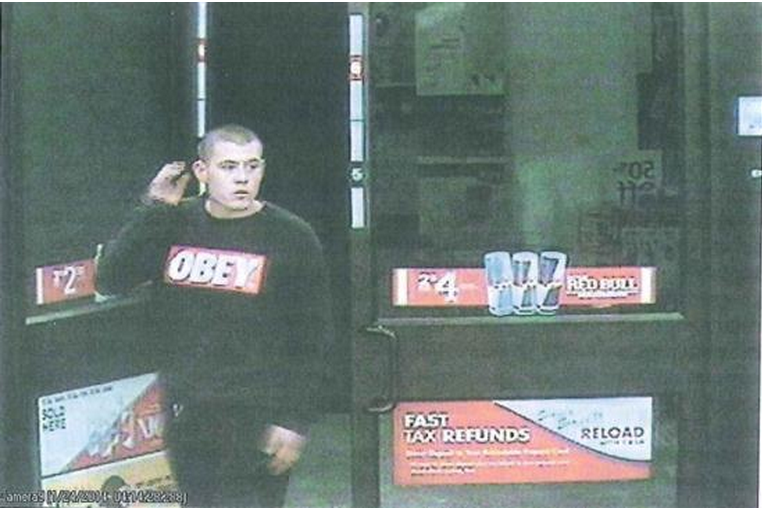 UPDATE: 1/28/201 – With the assistance of media coverage, Chino Police Officers arrested a suspect late last night, who is wanted for four robberies that took place in three cities, all within an hour early last Friday morning.

Someone watching the news last night recognized Justin Noblitt, 23, of Pomona, and contacted the Chino Police Department. As Detectives were following up on the lead, Claremont Police Officers detained Noblitt on an unrelated matter. With the assistance of the Claremont Police, Chino Officers arrested Noblitt without incident in the 500 block of Sycamore Avenue in Claremont at approximately 11:30 last night. Once in custody, Noblitt confessed to robbing the three 7-11 locations and the Shell gas station. He also claimed up to four more robberies that allegedly took place last Friday, Detectives are currently following up on those claims.

The suspect is being treated at a local hospital for injuries received prior to his arrest. Once released from medical care, he will be booked at the West Valley Detention Center for robbery.

The investigation is ongoing and anyone with information is asked to contact the Chino Police Department at 909-628-1234.

CHINO HILLS: Do you recognize this man? The suspect is wanted by the Chino Police Department believed to be in connection with multiple robberies across San Bernardino County.

Chino Police Officers have released an image of a suspect wanted for robbing a Chino 7-11 location at 12345 Mountain Avenue. The suspect is also wanted for questioning in regards to a robbery at a Montclair 7-11, as well as a 7-11 and a Shell gas station both located in Ontario. All four robberies took place last Friday in the early hours between 3:50 and 4:42 a.m., according to a release.

The suspect is described as a white or Hispanic male, in his early 20’s, 5’6’, with a thin build, and very short brown hair. He was last seen wearing a black sweatshirt with the word “Obey” on the front. He was described by witnesses as having fresh cuts under his left eye and on his left hand.

Anyone with information regarding the robberies or the suspect is asked to contact the Chino Police Department at (909) 628-1234.