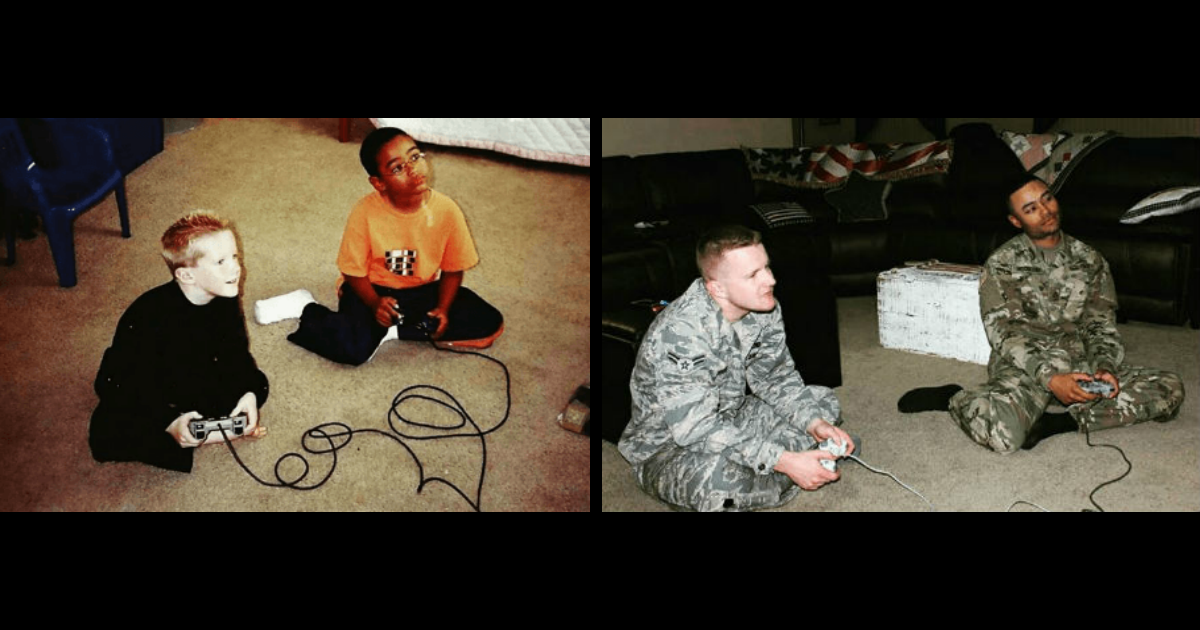 Ty Murray and Nik McCullum were just 6-years-old and in the first grade when the photograph was initially taken.

Both boys turned into young men and joined different branches of the military as they both had a passion for serving and protecting the country.

Ty joined the Air Force, and Nik joined the Army, which meant they weren’t able to hang out as often as they use to.

Tammy Murray, Ty’s mom, has a copy of the old photograph that hangs on her refrigerator door given to her by Ty’s mom many years ago.

“I was cooking and staring at the picture when I realized they were both going to be home at the same time. I thought it would be a very good idea to recreate that moment. So I called them and asked them to bring their uniforms so we could take photos of them,” stated Tammy.

Nik and Ty had no idea that Tammy had plans on recreating the old photograph.

Nick’s dad Eric went and grabbed the remote controllers, had them sit down, and they recreated the picture.

“I didn’t want to embarrass them too much, but they were good sports about it. We wanted them to sit and position like the original picture,” stated Tammy.

On February 27th Tammy decided to share the photos in Victor Valley News Group on Facebook. The photos have received over 6,000 likes, hundreds of comments, and shared countless times.

“I just want to say how proud I am of those two young boys that have grown to be two beautiful, loving, and caring men. I’m grateful to read so many loving comments from total strangers. It warms my heart, we appreciate all the support and thoughtful words from the community,” stated Tammy.