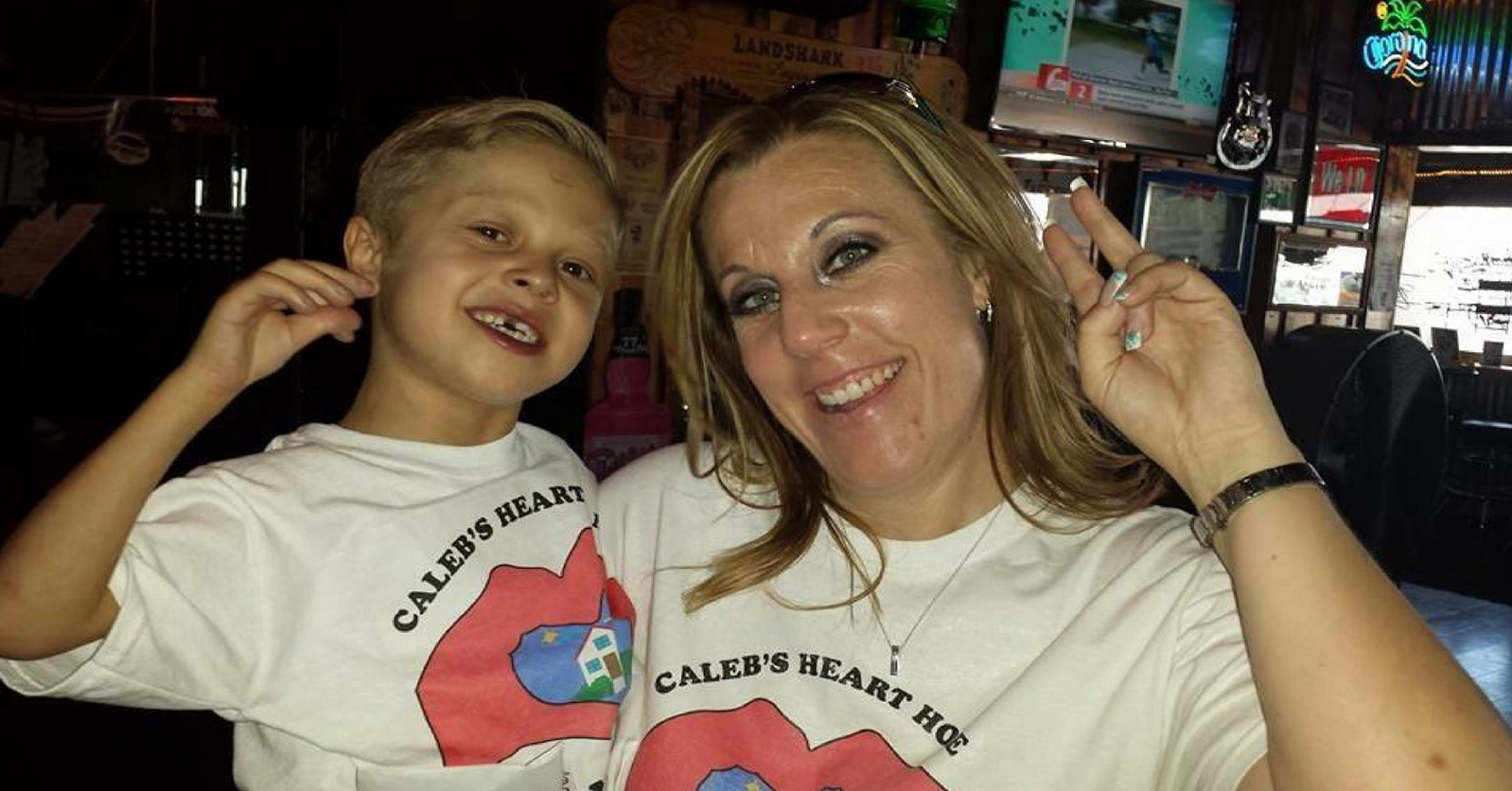 (VVNG.com)- Cathyleen Williams is a Barstow mother, that since the time of her beautiful baby boy Caleb’s birth nearly 8 years ago has along with him fought for his life. Life is a challenge for her and young Caleb most days, he was born with a heart condition which leaves him at risk of not only heart attacks, strokes and heart failure, but also a highly compromised immune system.  His mother, just like all mothers wants her son to be happy, but for Cathyleen there are so many things preventing her from doing so.

To Cathyleen, the harsh reality is that her son’s life may be cut short due to Hypoplastic Left Heart Syndrome. Just like most average individuals when Cathyleen first realized her son would be born with this condition she had no knowledge of what it entailed. Cathyleen, for the following years since his birth has become highly knowledgeable of a condition that she wishes was not part of her’s and her young son’s lives.

The condition Caleb has causes the left side of his heart to be underdeveloped which causes congestive heart failure. Due to his condition he has been through 60 total surgeries, 9 of those open heart in less than 8 years of life.  He has suffered a stroke that has left him with developmental delays. “I can not even describe how it feels to see your baby with his heart exposed, only covered by a piece of clear covering so the doctors can get in there quickly if needed” explained Cathyleen.

Although, Caleb at this time has been stable and looks like a normal little boy there is so much you cannot see. You cannot see that his heart is only at 50% function. People also can not see the sadness he feels as his mother has to say no when Caleb asks for normal things that she just simply can not provide to him. Cathyleen explained that Caleb has went to the park a few times when they felt safe that no other kids would be around. They prepared with disinfectant wipes and spray, wiping and spraying anything and everything Caleb might come in contact with. He had the best time, but since then he asks almost daily, “Mom (can you take me to the) park” in his sweet little voice.  Cathyleen, many times with tears in her eyes, because she knows again, for his safety, she must again say, “not today Caleb, but soon baby, soon.”

At this time Caleb is not quite ready to be on the heart transplant list until he goes into complete heart failure. “When he is ready, we do not want anything to prevent him from getting on that list.” said his mother. Cathyleen recently found out, after hearing about another local girl who needed a heart that they will not even add someone to the list if they live in  a home cooled by only a swamp cooler, which could put a medically fragile person at risk. She soon came to the realization that an upgrade would be essential, which was a new expense to their already minimal income, but something she felt would be possible. With Cathyleen you can see that nothing is too big for her baby, she has done many things to help earn the things her son needs.

Problem after problem arose as Cathyleen began her fight for her son’s life.  People and things along the way have stopped her, people reporting bake sales, that was helping her earn a lot of money-getting her on her way to their goals. She has fought not only to save his life, but to make all of it the best that she possibly could. Out of respect for her aunt, who owns part of the home, Cathyleen asked for her approval before going moving forward with the upgrade to the home. Cathyleen was bewildered when she found out that her aunt refused to allow the upgrade that Cathyleen needed to help save not only the health Caleb has left but quite possibly his life. Trial after trial occurred with small glimmers of positivity along the way,  most to be crushed right before Cathyleen’s weeping eyes.

To many with normal, healthy children it is not something easy to grasp, their daily life in Cathyleen’s words is like living in a bubble. The desire to send Caleb to school to be around other children was something she soon realized would be impossible. Cathyleen has worked wonders to give Caleb the closest thing to school without really being there. She decorated his classroom area beautifully and Caleb has now done school through Skype, where he is part of an actual classroom without physically being there. “He is doing really well, learning a lot and talking a lot better. The OT teacher did not see him for a whole year and she could not believe the progress” said Cathyleen.

Home Depot got word of what Caleb was doing as far as the classroom and offered to make him a real classroom set up with everything he needed to make him feel like he was in an actual classroom. The plan was to convert the garage, which the thought of made Cathyleen excited that her boy would have something that would provide some normalcy in his life. Her aunt had to approve of the plan prior to the conversion, which she decided against. Cathyleen was astonished that her aunt, a missionary at a Pasadena church, would have in her heart to help other strangers, but not her grand-nephew, Caleb to have the best possible life, considering his condition.

After contacting an attorney, who advised them because of the urgency on the situation with the swamp cooler that it would be best for the pair to just move. Moving is not as easy as it would be for most, Cathyleen did not want to miss the opportunity of the classroom for Caleb so renting and the classroom  not really a possibility. His mother mentioned she would do anything to get the “heart home” for Caleb. She would take on jobs, but her son needs her 24 hours a day, since she acts as his nurse.  Her young son could not be in the care of an individual who was not properly trained and those who are, would not be affordable. At this time their income is low because Cathyleen, who has two college degrees, can only work as his In-Home Supportive Services Provider for Caleb.

Regardless of how you look at it, Caleb is a miracle. Caleb will be celebrating his 8th birthday on October 19th.
“We never even though we would make it to 8 years old” added Cathyleen excitedly. Cathyleen has been amazed by the support of others in the community and of the fundraisers have brought in to help her with a down payment for Caleb’s heart home. At one point Cathyleen had enough for the down payment because of the price of homes at the time. Now the issue has been finding a home, the first home she found had black mold, and the second she found also was not purchasable because some people named on the trust of the home she was intending on purchasing decided against the sale after four months. Four months of time that the pair could have used to find another home, four months without the air conditioner Caleb needed and the classroom that would make his life a bit closer to normal.

During the 4 month wait for the second home, investors came in to the Barstow area purchasing many homes pushing the prices up. At this time, she will be looking at either a more costly home, requiring a higher down payment in order keep the payment within their budget or a home with a swamp cooler and the funds needed to convert it. Cathyleen needs to raise approximately $6,000-$10,000 more in order to get Caleb the home that he needs. “Money towards a home would be the best gift of all for Caleb, this would be giving him a longer life. Once he has his new heart he can play with other children, attend normal school and go to parks.” said Cathyleen.

Until then Cathyleen would like to find a home and if one day possible, even before receiving his heart she would love to build a parklike backyard for Caleb so he could go to a safe germ free park.

Cathyleen and Caleb would like the community to attend his fun-filled fundraising birthday party on October 19th at 1:00 P.M. at Revolution Barstow Bowl. There will be raffles, auctions, a bake sale, barbecue, carnival games, bounce houses, comedians, live music, a photo booth and so much more!  There will also be bowling specials for the whole family where a portion of the proceeds will help fund Caleb’s heart home. Bella Rose Boutique as well as many others are helping to provide raffle or other donations.

They are still seeking more raffle donations, barbecue items, drinks or whatever the public is willing to donate. High Desert Phoenix Foundation is accepting tax-deductible donations on their behalf.

There is also a Paypal account where donations can be made (Paypal a.garcia1321@gmail.com).  Also, support Caleb and Cathyleen in their fight by following the Facebook page, Fight For Caleb’s Classroom.