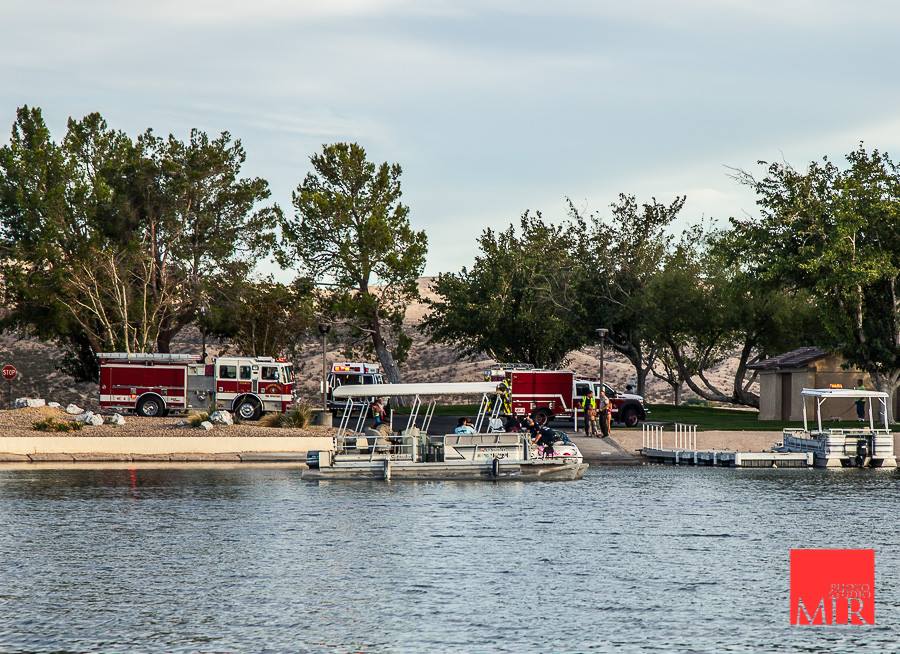 HELENDALE:(VVNG.com)- On Friday at 5:20 p.m., dispatch received a report of a boating accident at North Lake in Helendale causing injury to a small child.  The 4-year-old female child suffered from lacerations and was airlifted to Loma Linda Hospital. According to witnesses the boat was doing stunts which consequently lead to the tragic accident.  Upon seeing the young child falling out two  juveniles jumped in to rescue the child.

“The driver was doing 360’s as well as other stunts in his boat. The 4-year-old was in the passenger seat next to the driver with no life jacket on when the speed boats nose went up the girl flew out with  the boat landing on top of her which caused the propeller to severely injure her. The driver never jumped into the water to pull her out and attempt to save her,  he made the kids jump in to pull her out,” said a witness who asked to remain anonymous. Witnesses described the injuries to the child as severe and life threatening. “Her leg was barely on when the older children jumped in to pull her out of the water, she had injuries to her chest, face and back as well.”

Five to eight people were on the boat, at least four of those being minors, most believed to be riding without the permission of their parents and without life jackets. “The adult driving said get the heck in the water, so I jumped in. I felt like I was drowning, but was willing to give my life to rescue her,” said one of the minor passengers. According to the passenger, she pulled the young child from the deep water to prevent further injury or possible drowning. When she was pulled out the child was unresponsive and barely breathing.

According to witness statements the driver was unable to locate his phone and yelled to a nearby witness to call 9-1-1. The approximately 40-year-old boat operator is believed to be the same individual that resides on Nautical drive that has been reported many times for his reckless boating. The rescue units quickly went to the North Lake Liquor, where fire rescue paramedics treated the child as they awaited the arrival of the airship that upon arrival airlifted the ailing child to Loma Linda. The mother, who was not on the boat at the time of the accident, was driven to the scene as they were preparing to airlift the child.

The driver allegedly, according to witnesses present at the time of police questioning said the child was hanging over the boat, trying to reach the water, which caused her to fall out. All other witnesses including another boat operator on the water at the time, minors on the boat and the woman who called 9-1-1 all  had matching accounts of the incident, which included “drifting” or speeding and the boat doing 360’s flinging the child from the boat.

The community is coming together to help her family through car washes,  as well as prayers for the young child’s recovery. “These children are going to have to live with this event for the rest of there lives, not to mention what kind of quality of life this little 4-year-old is going to have even if she does survive this horrific event,” stated an anonymous witness.

Family friends say, the young child is in the Loma Linda Intensive Care Unit, and is expected to survive this tragic accident. She is currently out of critical condition, she is awaiting surgery and is expected to require multiple surgeries in order to reattach her leg and repair multiple deep cuts to her face and chest area.

At this time it is unknown if the driver of the boat will be facing any charges. The incident is still under investigation by the San Bernardino Sheriffs Department.

UPDATE: Man Killed on 210 Freeway Identified as a Hesperia Man