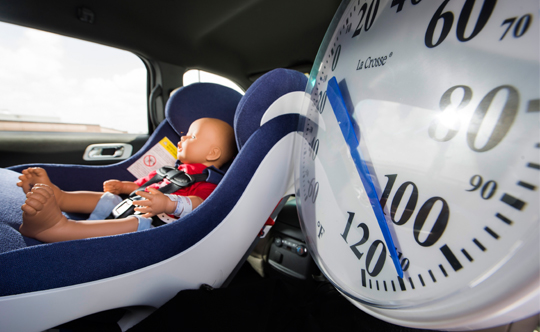 VICTORVILLE, Calif. (VVNG.com) — Carmen Larose, 42, of Victorville was arrested after leaving her 20-month-old daughter inside of a parked car for 30 minutes, officials said.

Deputies from the Victorville Police Department responded to assist with a medical aid call after receiving information that a child had been left in a parked vehicle for approximately 30 minutes at the location.

Deputy V. Quiroz arrived at the home and found Carmen Larose inside holding her daughter, who was unresponsive, officials said. Quiroz immediately rendered aid to the child until medical personnel from San Bernardino County Fire arrived.

The child was flown to a trauma center for treatment where she remains hospitalized in critical condition.

“During the investigation, it was discovered Larose had taken her daughter with her earlier that day to run errands. When they returned to the home, Larose parked the vehicle in the driveway and went inside. She returned to the vehicle approximately 30 minutes later, intending to run more errands, and discovered she had left the child in the vehicle,” stated a sheriff’s news release.

Larose was arrested and booked at High Desert Detention Center for cruelty to a child. Public arrests records show she was released on bail and is no longer in custody with no scheduled court appearance.

The National Weather Service issued a heat-wave advisory after temperatures were forecasted to reach triple digits in the Victor Valley. At 2:30 pm, on Wednesday outdoor temperatures in Victorville were 107 degrees. The temperature inside a vehicle parked in the sun or shade can climb rapidly and rise over 20 degrees in just 10 minutes.