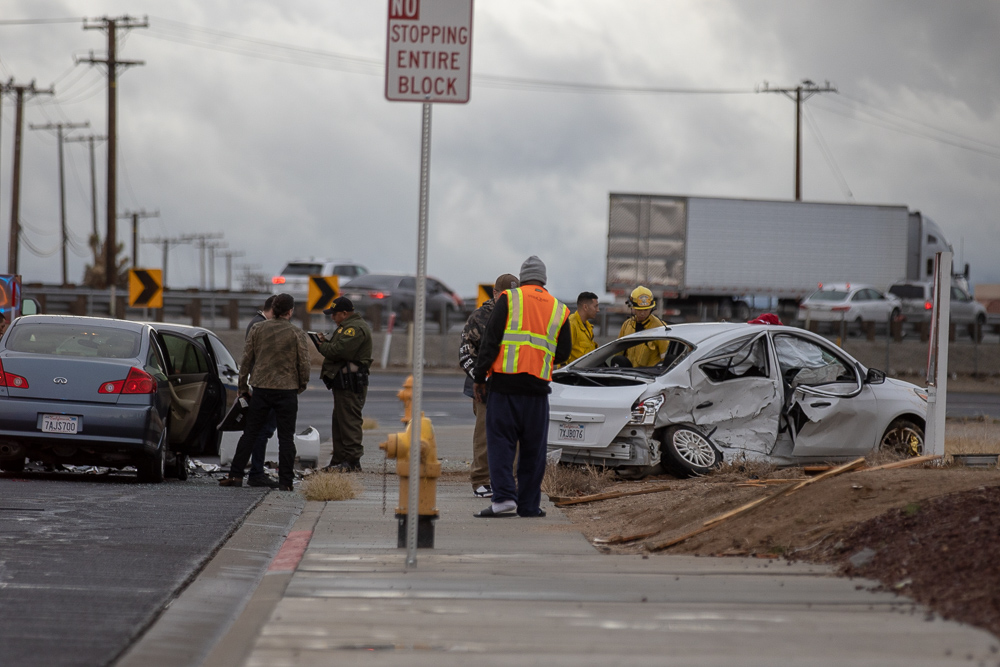 VICTORVILLE, Calif. (VVNG.com) — A stretch of Amargosa Road was closed Thursday afternoon following a major car crash that left a 2-year-old child fighting for his life.

The traffic collision was reported at 4:02 p.m. on Amargosa Road between Luna and Dos Palmas Roads in the city of Victorville.

Sheriff’s officials confirmed that a white Nissan was traveling northbound on Amargosa Road when the driver lost control and crossed into westbound traffic.

Upon entering the westbound lanes, the Nissan was then t-boned by a blue Acura sedan, causing major damage to both vehicles.

A Good Samaritan, David Kintzer II, told Victor Valley News that he and others immediately stopped and helped pull two kids, ages 5 and 2, from the white sedan.

“He was blue when I got him out and not breathing,” stated Kintzer about the 2-year-old child. “I’ve never seen that before and I have three kids, to see him just limp was the worst thing ever.”

Sergeant S. Kelly with Victorville Police Department said both children were properly restrained in the back seat and that the youngest was closest to the impact.

The 2-year-old was rushed to the nearest hospital with life-threatening injuries and the 5-year-old child and two adults from the white Nissan were transported to a trauma center by ground ambulance.

The driver of the Acura sustained non-life threatening injuries to their arm.

Amargosa Road was closed between Maricopa and Luna Roads for the investigation.