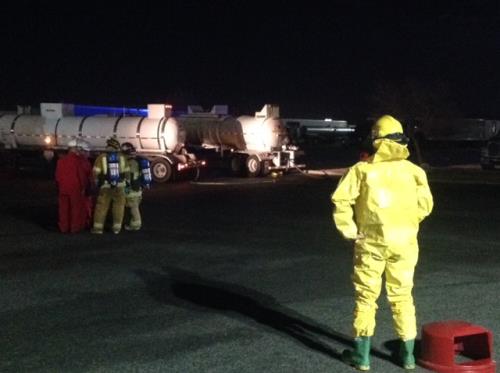 HESPERIA: On Monday December 16, 2013 San Bernardino County Fire responded to a hazardous materials leak at the Pilot Truck Stop located on Joshua and U.S. Hwy. 395, just west of I-15, in the City of Hesperia. At approximately 4:54 p.m. a truck driver hauling 4,800 gallons of hydrochloric acid smelled the foul odor of acid when he exited his semi after parking at the truck stop. He immediately put on his safety gear and started searching for a leak. He discover the acid leak coming from a faulty valve underneath the tank and immediately left the area where he called fire personnel.

Upon firefighter arrival, they found that several gallons of the hydrochloric acid had leaked from the container and into a nearby storm drain. A team of five San Bernardino County Fire Hazardous Materials Specialists arrived on scene and deemed the location a hazard and the truck stop was evacuated. Firefighters and deputies with the San Bernardino County Sheriff’s Department evacuated an estimated 200 people from the facility.

By 7:35 p.m., the remaining acid had been off-loaded to another carrier and the leak mitigated. In all, an estimated 600 gallons of hydrochloric acid had leaked from the semi hauler.

Hydrochloric acid can cause several respiratory problems or even death if ingested or inhaled. Burning to the throat and lungs can occur as well as skin irritation. The acid odor could be smelled upward to a mile away. There was a slight breeze to the North, pushing the odor away from the main facility of the truck stop. Patriot Environmental is handling clean-up efforts. County Fire Haz-Mat specialists will remain on scene and monitor the clean up. The truck stop will remain evacuated until the clean-up is complete, which is estimated to continue throughout the early morning hours.

Eight firefighters responded to the scene and contained the area. There were no injuries sustained as a result of the incident. In the event you encounter a hazardous materials spill, do not attempt to clean it up. The best action is to safely evacuate and then call 911 from a location away from the spill area.