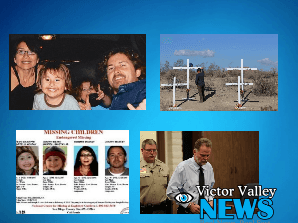 VICTORVILLE-(VVNG.com): Charles “Chase” Merritt was in court with his defense attorneys on Thursday, after a Friday, January 15th hearing left his counsel asking the court to dismiss them from the case. Merritt stands trial for the murder of an entire Fallbrook Family of four that went missing in 2010.

Merritt was arrested in the 2100 block of Bahama St in Chatsworth on November 5, 2014,  just days following

the one-year anniversary of the four bodies being located in shallow graves in a remote desert area in Victorville. He was taken into custody for four counts of murder and remains in custody at the West Valley Detention Center in Rancho Cucamonga.

At one point early in the trial, Merritt shocked the public with the announcement that he planned to defend himself in court, only to later hire attorneys from the Mettias law firm as his representation.

According to court records, the hearing on Thursday was a continuance on Friday, January 15th pretrial hearing at which time Merritt did not want to waive his right to a speedy trial against his attorney’s recommendations. His counsel, according to court records indicated to the judge that they are not ready to start the trial.

Attorney Rajan Maline and Attorney David Askander on behalf of Mettias Law Firm requested to be relieved from the case. The judge was not able to relieve counsel at that time since Attorney Jimmy Mettias was not present or able to respond.

Attorney Jimmy Mettias was present in court on Thursday morning and the request to be relieved from the case was granted. Merritt is ordered back at the Victorville Superior Court on the morning of January 26th in order to discuss his representation.