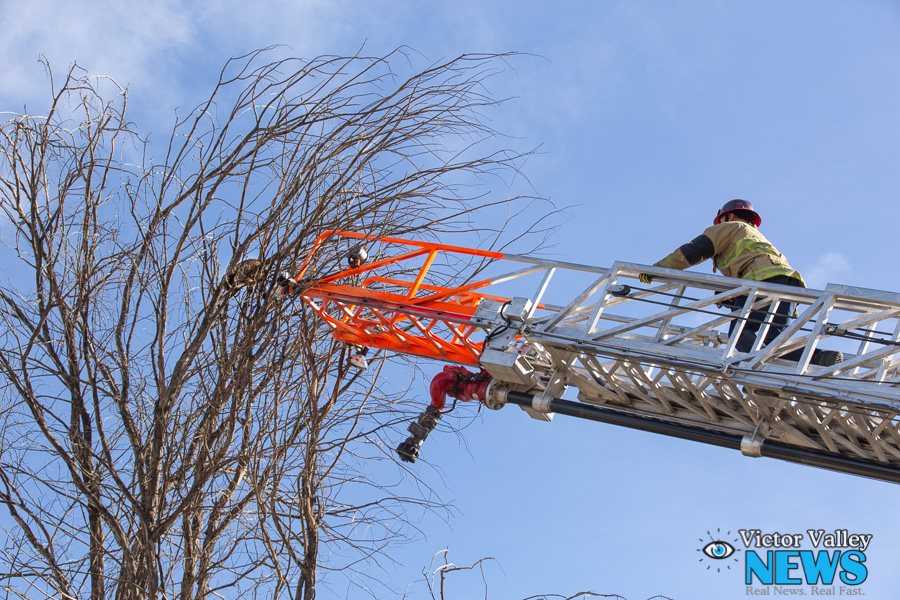 VICTORVILLE, Calif. (VVNG.com)  Animal lovers began pleading on Facebook asking for help in getting a cat down from a tree that had been stuck for a whole week.

Aiyana Haberman-Ellis was prepared to climb the tree and rescue the cat herself, but the dead tree would not have supported anybody that attempted to climb it.

“I’m not going to leave no cat in a tree, so I brought my own ladder and I was going to try to get up in the tree and get him,” Aiyana said.

That’s when Battalion Chief Bobby Cox pulled up and saved the day.

“We’ve received calls over the last two or three days saying there was a cat stuck in a tree; it’s normally something we don’t respond to because usually if a cat can get up, they can get down,” The San Bernardino County Fire Department Battalion Chief told Victor Valley News.

The cat was reunited with the owner a short time later.

“But they called this morning and said the cat had been up there for seven days, so I came out and took a look and said ‘yeah, bring the truck out’ and if we can safely bring it down we’re going to do so,” Cox said.

As a true man of his word, a ladder truck responded moments later and the cat was safely rescued by firefighter Matthew Durham from Victorville Station 311.

Cox said that in his 20-year career he had never rescued a cat from a tree, “this is not something we usually do, but it was a new experience for me,” stated Cox.

Aiyana, who works with the Star Tails Hair Animal Rescue, immediately took the cat to a vet for a medical evaluation, and other than few broken claws, the cat was healthy.

A picture of the rescued cat was posted in the Victor Valley News group, and within a short amount of time the cat was reunited with its owner.

The owner said it was the cat’s first time getting out, and it won’t be getting out again.