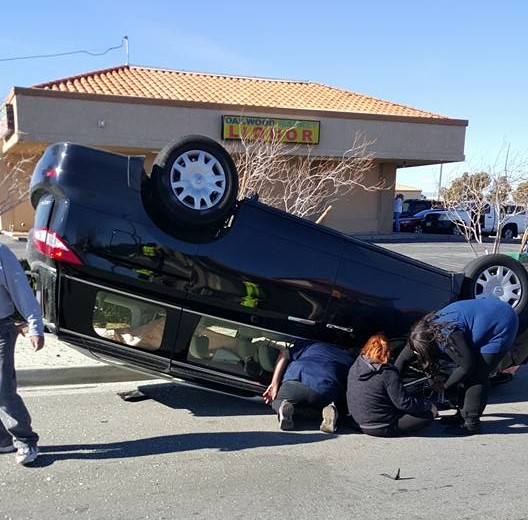 HESPERIA, CALIF:(VVNG.com)- A two vehicle traffic collision was reported just after 12:30 PM on Friday, January 8th near the intersection of Oakwood and Sequioa Avenues.

One vehicle, a Nissan Quest flipped over and landed on its roof. Witnesses rushed over to the vehicle to check on the occupants inside the minivan.

A female inside the minivan was transported to a local hospital with what appeared to be non life threatening injuries. The driver of the van was not injured.

According to a witness at the scene, Jorge Montes, the male driver in the vehicle was traveling at a high rate of speed down Sequioa Avenue. The minivan was traveling in the opposite direction down Oakwood Avenue heading towards Mariposa. “The car wasn’t able to stop in time and he crashed into the van”, said Montes.

The male driver of the vehicle was also transported by ground ambulance.

Vehicle overturns in Hesperia injuring one.
Photo By: Monique Garcia‎