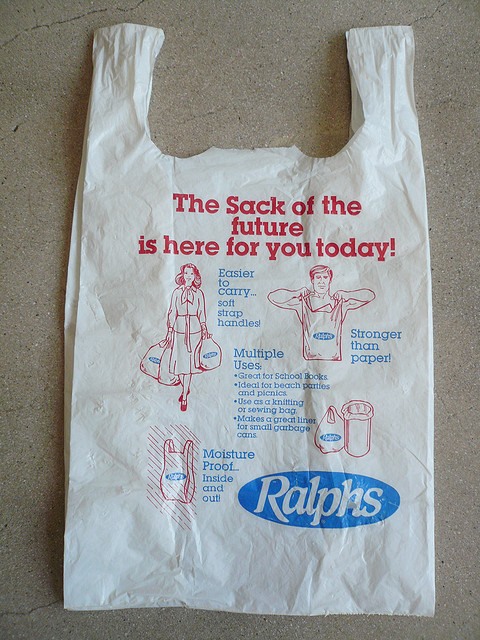 (VVNG.com)- For many years environmentalists have researched the effects plastic bags have on our environment. Many have switched to choosing paper bags over plastic for many years for this reason. Since plastic bags have only been out for approximately 50 years, all that is safe to say at this point is they take very long to biodegrade. Estimates, based on experiments rather than facts, have said biodegradation takes 500-1000 years. The fact is retail type shopping bags, made of polyethylene do not biodegrade at all. The process of biodegradation takes microorganisms assisting in the process. Since microorganisms do not recognize the man-made substance, polyethylene at all as food it is not able to biodegrade. Although they do not biodegrade they do in fact photo-degrade from the sunlight, causing them to become brittle and weak causing them to break down.

Starting July 1st 2007, most larger grocery stores in California were legally required to recycle plastic shopping bags. Many shoppers, especially grocery shoppers have grown to depend on the convenience as well as reusing these bags for other household needs.

Paper or Plastic? A question of the past.

On Tuesday, September 30th, governor Jerry Brown signed the first statewide ban on single-use plastic grocery bags. Although it is the best thing for our future and our environment, many Californians cringe at the idea of carrying multiple sometime weak, paper bags full of heavy groceries. “I guess next time I go to the store I’m going to grab a handful every time”, commented Victor Valley News member, Thomas Richard Kennedy Jr.

There are other options, reusable (tote) bags are sold in most major grocery stores for a nominal price. “They do make great trash bags, but I can remember a time before they came about. I think we will all live,” commented Victor Valley News member Lynn Warren. “The only way to do what is right is to carry our own bags to and from the store. This way we do not pollute and we do not kill trees.”

Not only a large portion of California shoppers are unhappy, the national coalition of plastic bag manufacturers also plan to attempt to repeal the law through a voter referendum. They say that such a ban will cause the loss of many manufacturing jobs for those who currently manufacture these bags. The bill, includes $2 million in loans for these manufacturers to switch to manufacturing reusable bags, which should help ease the concern of possible job loss.

This ban like most others in the past, is not immediately in effect, the ban scheduled to be effective as of July 2015. The plan is to first stop the use in grocery stores and supermarkets (including retail giants Walmart and Target) then beginning 2016, also phase them out of convenience stores.. The law does not apply to other retailers.

This ban also comes with the stores to charge a fee of approximately 10 cents for the use of plastic. The bill also states that the fee is to be waived to customers who are on public assistance. San Francisco had a one-time use plastic bag ban since October 2013 and Los Angeles has since July 2014. Since major cities have ran into no major problems by doing so the ban can be not only a short-term success but a long-term one for our future.