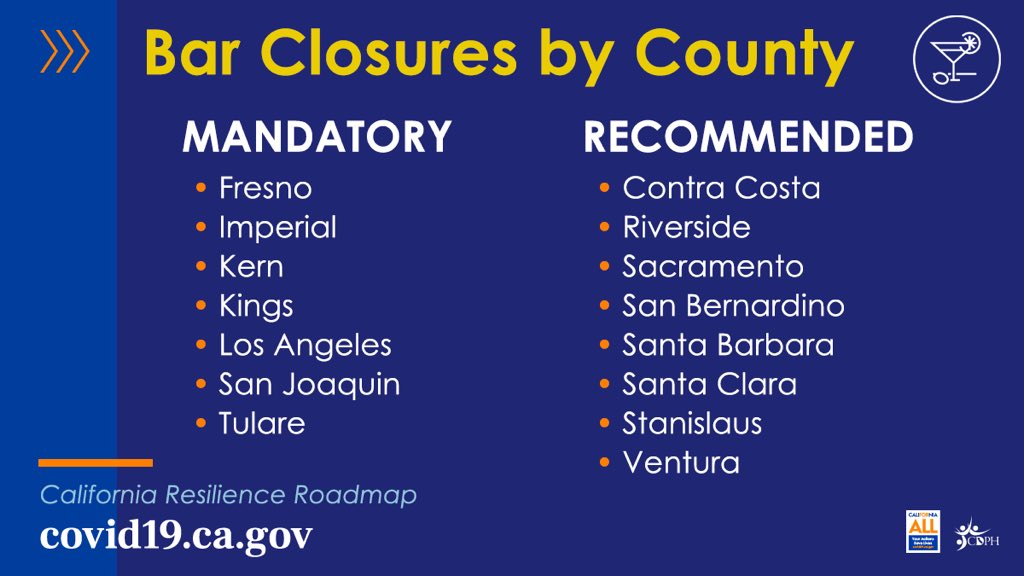 The County of San Bernardino was on a second list along with seven other counties that were recommended to take action on their own and close.

A bar, foundationally, is a social setting where typically not only small groups convene, but also where groups mix with other groups.

“COVID-19 is still circulating in California, and in some parts of the state, growing stronger,” Newsom said in a statement given to media. “That’s why it is critical we take this step to limit the spread of the virus in the counties that are seeing the biggest increases.” Newsom also tweeted out the news on Sunday

Brewpubs, breweries, bars, and pubs, should close until those establishments are allowed to resume operation per state guidance and local permission, unless they are offering sit-down, dine-in meals. Alcohol can only be sold in the same transaction as a meal.

Bars generally attract a younger adult population. While younger adults without co-morbidities tend to have less severe symptoms and overall disease outcomes, increased cases, even in this cohort, will lead to increased hospitalizations and deaths. As the virus spreads more broadly in this population, younger individuals become a source of spread to more vulnerable adults and the broader community, a factor that is complicated by the fact that younger individuals have a higher likelihood of asymptomatic or mildly symptomatic infection.

REMINDER: CA, you are now REQUIRED to wear a mask in public spaces.

We’re seeing too many people with faces uncovered. Wearing a face covering is critical for keeping people safe and healthy, keeping businesses open and getting people back to work.

Do your part. Wear your mask.

#COVID19 is still circulating and that’s why it is critical to take this step to limit the spread in counties seeing the biggest increases.@CApublichealth announced the closure of bars for counties on the County Monitoring List for more than 14 days. https://t.co/Z3Rqsc0eXn pic.twitter.com/S6wvrcXhyo

Related Topics:coronaviruscovid19los angeles
Up Next

Customer angry over lost keys gets arrested for assault and theft

Hesperia Zoo is looking for volunteers