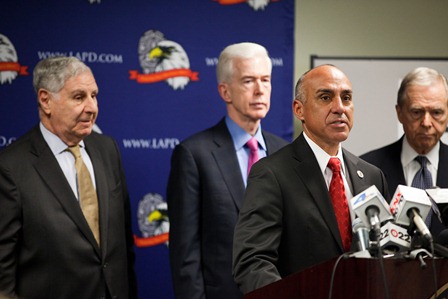 “I refuse to back down in this fight as we move to bring about common sense reforms to our state’s broken death penalty system,” Ramos said as former Governors George Deukmejian, Pete Wilson and Gray Davis looked on. ”We must continue to fight for the families who lost their loved ones at the hands of California’s most violent criminals. For them, the pain never ends.”

Although, the state of California continues to issue the death penalty as a form of punishment. Capital punishment has not been used on a single person convicted in the state of CA since February 2006.

In 2006, U.S. District Judge Jeremy Fogel halted executions in California after finding flaws in the state’s execution process. The current hold is pending judicial review of a new execution chamber and new methodologies for executing prisoners.

Though prison officials have revised their procedures since 2006, death row inmates allege the procedures are still flawed and expose them to cruel and unusual punishment.

It was argued that if the three-drug lethal injection procedure were administered incorrectly, it could lead to suffering for the condemned, potentially constituting cruel and unusual punishment. The issue arose from an injunction made by the U.S. 9th Circuit Court of Appeals which held that an execution could only be carried out by a medical technician legally authorized to administer intravenous medications. The case led to a de facto moratorium of capital punishment in California as the state was unable to obtain the services of a licensed medical professional to carry out the execution

As of 2013, there are 741 offenders (including 20 women) on California’s death row. Of those, 126 involved torture before murder, 173 killed children, and 44 murdered police officers.

Because California’s death penalty was enacted through the voter-initiative process, the only way to replace it is through a voter-approved ballot measure.