Broken out window near the main office at the Travel Inn & Suites on 7th Street in Victorville.

VICTORVILLE:(VVNG.com)- Deputies responded to the Travel Inn & Suites located on the 14900 block of 7th Street following a report of shooting at the business.

Per scanner traffic, the suspect shot out a window near the front office and attempted to rob the victim inside. The suspect, described as a Hispanic male adult in a gray hoodie and a gray beanie took off running on foot towards Circle Drive.

After a brief search of the area police caught up with the suspect near the corner of Culley Street and Lacy Street. The deputy reported the suspect was uncooperative, per scanner reports. Moments later the deputy called out “shots fired” and requested for medical to respond.

At this time it’s unclear what exactly transpired that led to the officer involved shooting. Police have shut down 7th and Lacy and Mojave and Lacy. Crime scene tape is surrounding the area of Lacy and Culley Streets as well as the parking lot of the Travel Inn. A shattered window can be seen from the street near the main entrance to the office.

An air ambulance was requested to airlift the suspect to Arrowhead Regional Medical Center for treatment of non-life-threatening injuries.

Anyone with information regarding this investigation is urged to contact Detective Motley or Sergeant Myler of the Specialized Investigations Division, Homicide Detail (909) 387-3589. Callers wishing to remain anonymous are urged to contact the We-Tip Hotline at 1-800-78-CRIME(27463) or the We-Tip website at www.wetip.com. 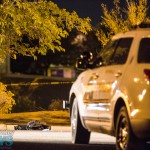 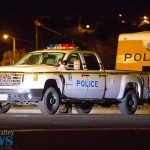 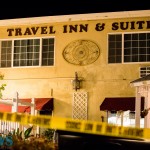