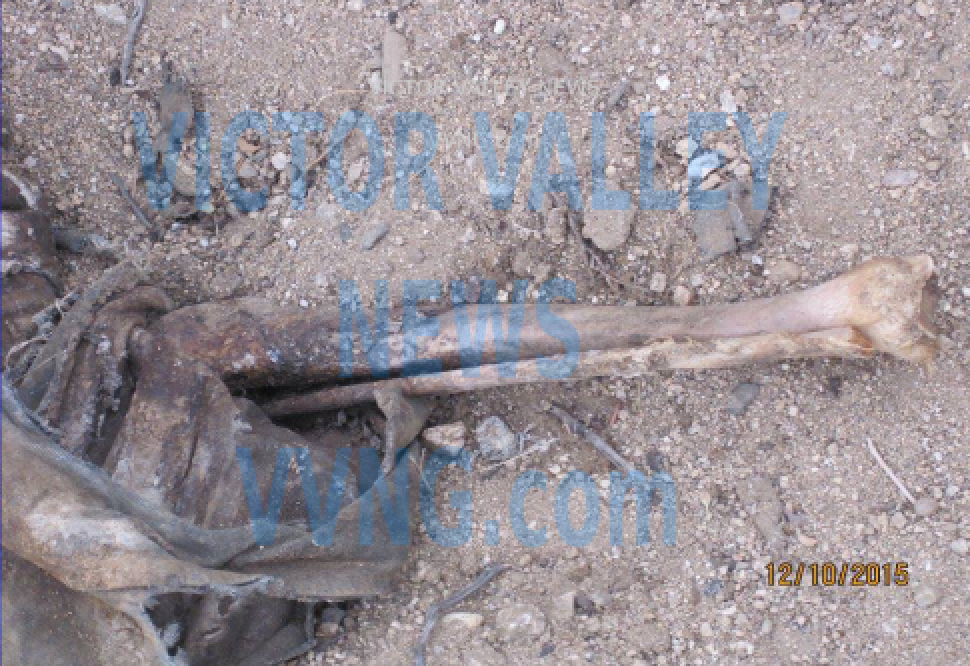 LLANO-(VVNG.com):  It was an ordinary Thursday evening for Trevor Thompson as he was riding his dirt bike in Llano near 228th Street and Fort Tejon Road.

Thompson said that he spends many days riding his dirt bike in this area, all before this being uneventful. Llano, a desolate Los Angeles County unincorporated city, on the border of San Bernardino County has large areas empty of desert.

Thompson told Victor Valley News that as he was riding he spotted something unusual under a couch, as he inspected further he saw what he believed was human remains sticking out of torn jeans. “There was a couch, that was covering the grave. You could see where the animals had started to dig up whom ever was there,” said Thompson.  The investigation immediately began on Thursday evening after Thompson reported the discovery to the Los Angeles County Sheriff’s Department, but the Detectives and the Coroner returned on Friday morning to retrieve the bones.

In a statement, the Los Angeles County Sheriff’s Department officials said that the bones were collected in order to determine if they were in fact human bones. Thompson was called back to the scene to answer questions about his discovery. During the brief interview with detectives, he told Victor Valley News reporters that they showed him a large belt buckle with the word “Texas” written on the lower right side of it. The buckle he said appeared to be one that a “rodeo cowboy” would wear.

“They asked if I knew about any rodeos nearby stuff like that. They did tell me they had found a body though,” said Thompson. Some in the community are speculating that if these are determined to be human remains, that there is a chance they may be that of a missing Phelan man. “With the missing we have out here, I hope that once we know who this is the family can have closure,” said Thompson.

Anyone with information about this incident is encouraged to contact the Los Angeles County Sheriff’s Department’s Homicide Bureau at (323) 890-5500.  If you prefer to provide information anonymously, you may call “Crime Stoppers” by dialing (800) 222-TIPS (8477), or texting the letters TIPLA plus your tip to CRIMES (274637), or by using the websitehttps://lacrimestoppers.org.

Below Freezing Temperatures and Rain Coming to the Victor Valley