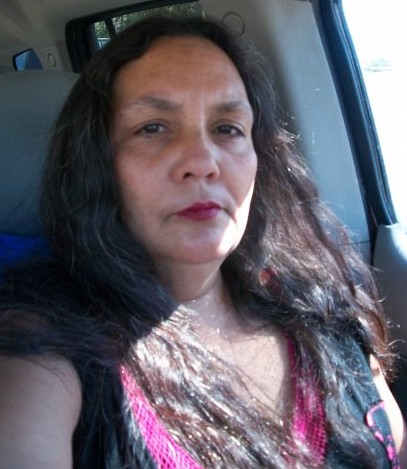 Linda Ann Harrell, known to many as Linda Lou, was identified as the victim who died from her injuries while riding her 1987 Yamaha motorcycle Friday afternoon in Adelanto.

At 4:33pm on 04/18/2014, Linda Ann Harrell, a 53 year old resident of Adelanto, was traveling westbound on Palmdale Rd., approaching Bellflower St., when the driver of a silver 2007 Chevrolet Silverado, traveling southbound on Bellflower St.,  pulled out in front of Harrell causing her to collide with the driver side of the truck.

According to a male witness on scene, the driver of the truck initially slowed down as if he was stopping, but then suddenly left the scene.

A Sheriffs patrol unit that was leaving a previous rollover on US 395 happened to be traveling west on Palmdale Road seconds before the incident occurred, and radioed for medical help for the female solo rider.

The truck, which sustained major damage to the front driver side, was located a few miles away on US Highway 395 just south of Luna Road.

It is believed the driver of the truck phoned his parents to meet him on scene prior to his arrest.

A drug and alcohol test was rendered on the male driver, however the results have not been released.

Harrell was confirmed deceased at the scene.

“I just can’t believe my baby is really gone. I’m missing her so much, baby our love is the best gift our father in heaven ever gave me but now you are resting in his loving arms while mine can only ache for your embrace,” Commented her husband Robert “Bob” Harrell, “We all love you so much and will miss you like crazy. You are a wonderful and loving wife, a deeply caring mother and a wonderfully devoted friend to many. Rest in peace my beloved one.”

As a reminder, an average of three lives a day could be saved, experts estimate, if motorists were more careful at intersections. In fact, crash data reveals that motorcycle crashes happen more often at intersections than anywhere else, relative to the amount of time riders spend in them.

• Be cautious when going through intersections. • Look left, right and left again for motorcyclists. Also, be aware that because of a motorcycle’s small size, a bike can easily hide in a car’s blind spot.• Allow for greater following distance. Most motorcyclists do not activate their brake light when slowing down. They slow down by downshifting.• Don’t assume motorcyclists are speeding. Due to their small size, motorcycles may seem to be moving faster and appear farther away than they really are.• Motorcyclists often adjust position within a lane. This helps them be seen more easily by motorists. They also tend to avoid the center of the lane because of liquids that leak from car engines, transmissions and radiators.Tips for Motorcyclists

• Be cautious when going through intersections. • Be visible when you ride. Try to avoid blind spots, wear bright-colored, protective clothing, activate turn signals early and always use your headlights.• Flash your brake lights when slowing down. This helps others on the road know your intentions.• Leave enough space between you and the car in front of you. You’ll have more time to react to other motorists’ actions.• Ride within your limits. If you’re a new rider, consider taking a training course. Rush hour is not the time to learn how to maneuver your motorcycle. All riders should avoid extreme temperatures and inclement weather.