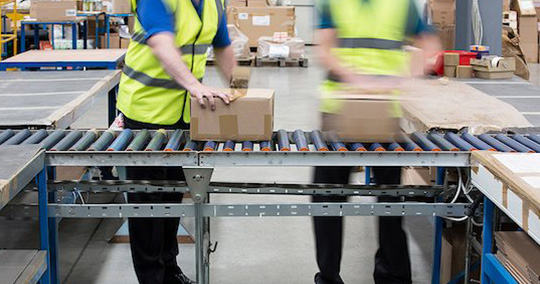 Apple Valley, CA – August 28, 2017: The Town of Apple Valley will soon be home to one of only five existing Big Lots distribution centers in North America. The 1.3 million-square-foot facility is planned for construction just south of the Walmart Distribution Center on Johnson Road.

“The latest project developments are good news for jobseekers in the High Desert as the project will serve as a catalyst in attracting continued economic and industrial growth not only to Apple Valley but the entire High Desert,” said Orlando, Acevedo, Assistant Director of Economic Development and Housing, “It’s good to see the project moving forward.”

The 1.3 million square foot distribution center is estimated to bring between 400-500 new jobs to Apple Valley and the surrounding region. Additionally, the $120 million dollar project investment by Big Lots, including streets and infrastructure improvements, and increased property taxes will be a major shot in the arm for the entire High Desert economy.

Distribution centers across America have spurred local economic growth in their communities. They attract other companies to the area and are known to sponsor local events, support charities and work with educational institutions to improve the local workforce. According to the corporate office, Big Lots currently employs more than 35,000 associates across the U.S. and operates approximately 1,400 stores in 47 states.

“Apple Valley is ripe to capture Southern California’s next wave of economic growth,” said Apple Valley Mayor, Scott Nassif. “We offer a cost-competitive alternative to the rising costs and shrinking space for large scale industrial projects in the Inland Empire, which is one of the nation’s hottest industrial markets.”

“We are excited to see another transportation option for our residents,” said Councilwoman Barb Stanton. “This new route will provide students and workers from across the high desert the opportunity to work and continue their education right here in Apple Valley.”

The Apple Valley Big Lots Distribution Center will replace the current facility in Rancho Cucamonga as one of the five in the US. The other four distribution centers are located in Alabama, Ohio, Oklahoma and Pennsylvania.