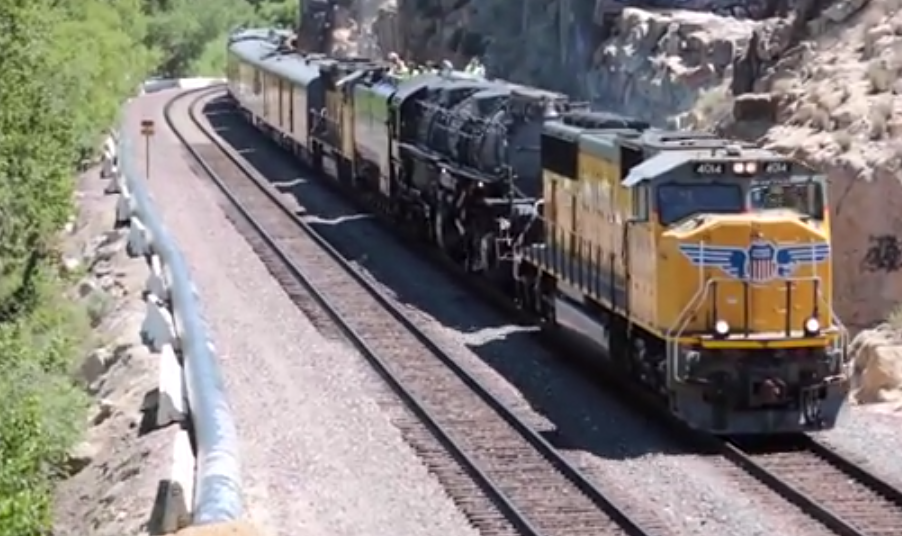 Hundreds of Victor Valley residents gathered outside of the Victorville Amtrak Train Station for a historic sighting of the Union Pacific “Big Boy” #4014 locomotive.

It is the heaviest single expansion steam locomotive ever built, weighing about 1,200,000 pounds. Big Boy locomotives are hinged (or articulated) because of its great length. Its forward pony trucks and drive wheels swivel independently of the boiler and rear drivers when rounding curves. The Big Boy class was designed for heavy freight trains and was used between Ogden, Utah and Cheyenne, Wyoming.

In the summer of 2013, Union Pacific reacquired Big Boy number 4014 and plans to restore it for operation as part of its Heritage Locomotive fleet.

Big Boy No. 4014 departed RailGiants Train Museum on November 14, 2013, when it began its gradual journey across the fairgrounds parking lot. It departed the Los Angeles County Fairgrounds at 2:45am on January 26, 2014, and arrived at Union Pacific’s West Colton facility in Bloomington, California, at 1pm that afternoon.

The move of Union Pacific Big Boy #4014 from West Colton began at 8:00 am on Monday morning, April 28, 2014 and made its way to the Victorville train station in the early afternoon.

**Be sure to change video output to 1080p High Definition to view higher resolution.