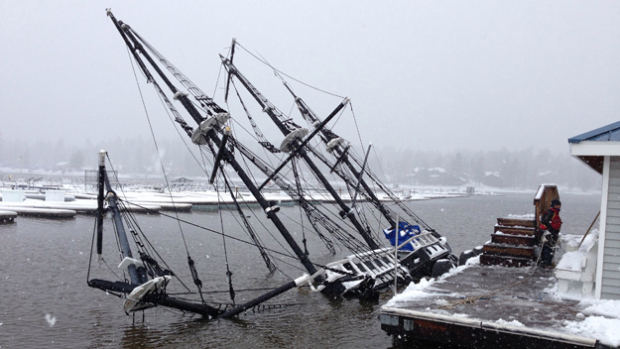 Big Bear Lake’s iconic tour boat The Big Bear Pirate Ship sank sometime during the night of Friday, February 28, between 6 p.m. and 6 a.m. the next morning. The sunken ship was discovered at Holloway’s Marina, where it is docked, Saturday, March 1 at 8 a.m. by a Holloway’s Marina employee. The cause of the sinking was due to severe weather on Friday evening with rain, snow and intense winds.

“It didn’t go down because we had too much booty on board. It simply went down because of the weather,” said Loren Hafen the owner and operator of Big Bear Pirate Ship.

The ship was fully winterized including closed hatches, de-icing, and fenders on the docks. Hafen claims the ship was inspected Friday afternoon between 3 p.m. and 4 p.m. and it was fully secured at that time.

The Big Bear Pirate Ship has been in Hafen’s possession since 1998, and he has never had an issue. Hafen, who is a certified scuba diver, plans to dive Monday, March 3 to assess the situation. He says he plans to raise the ship out of the water and repair any damages. He also considers this a great opportunity to refurbish the ship for Holloway’s Marina’s 100 year anniversary this summer.

The Big Bear Pirate Ship is a featured attraction at Big Bear Lake. From May to October, guests can take a narrated tour aboard the replicated pirate ship. The ship is a 1/3 scale replica of a 16th Century Spanish Galleon with four masts (sprint, fore, main and mizzen).