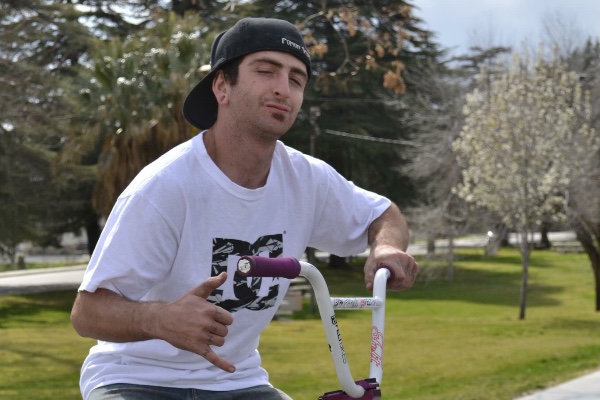 PHELAN, Calif. (VVNG.com) Officers arrested a man Friday evening, hours after a truck struck and killed a 27-year-old bicyclist in a hit-and-run collision.

It happened on September 15, 2017, at 2:00 p.m., in the area of Johnson Road, north of La Mesa Road near the California Aqueduct in the town of Phelan.

Damian Chase Frazier, of Phelan, was riding his bicycle northbound on Johnson Road when a 2003 Chevy Silverado struck him from behind.

Authorities said the driver of the truck, 23-year-old Sage Aaron Jones Goodman, a resident of Wrightwood, failed to notice Frazier and collided into him. Goodman failed to stop and call 911 or render aid. Instead, he fled the scene of the accident.

An ambulance transported the bicyclist to Desert Valley Hospital where medical personnel pronounced Frazier dead in the emergency room at 3:02 p.m.

According to public arrest records, Goodman was later arrested by officers from the California Highway Patrol in Crestline, CA at 6:06 p.m., on Friday.

“He [Goodman] was arrested for Felony hit and run and Felony DUI. There will doubtless be other charges added, like manslaughter,” officer R. Grieve told Victor Valley News.

Goodman’s bail is set at $250,000.00 and scheduled for arraignment in a Victorville courtroom on September 19th.

Damian’s family and friends are heartbroken after the death of their beloved brother and son. A Gofundme account started to help raise funds for funeral expenses describes Damian as a joy to have around. Donations can be made by using the following link: Damian Frazier Funeral.

The collision is under investigation by the CHP – Victorville office. For information and questions contact Officer M. Fernandez at 760-241-1186.

Cooler weather ahead for the Victor Valley

APPLE VALLEY, Calif. (VVNG.com) — Authorities identified a 19-year-old who drowned in a lake during his birthday celebration as Jonathyn...

Transient, 22, arrested in connection to multiple burglaries in Victorville

VICTORVILLE, Calif. (VVNG.com) — A 22-year-old transient was arrested in connection to multiple commercial burglaries in the City of Victorville,...

VICTORVILLE, Calif. — For many, the sheer notion of losing weight can be intimidating, especially when you consider that more than...

Another step was taken towards restoring full service for Victor Valley Transit bus riders, as the organization now moves from...