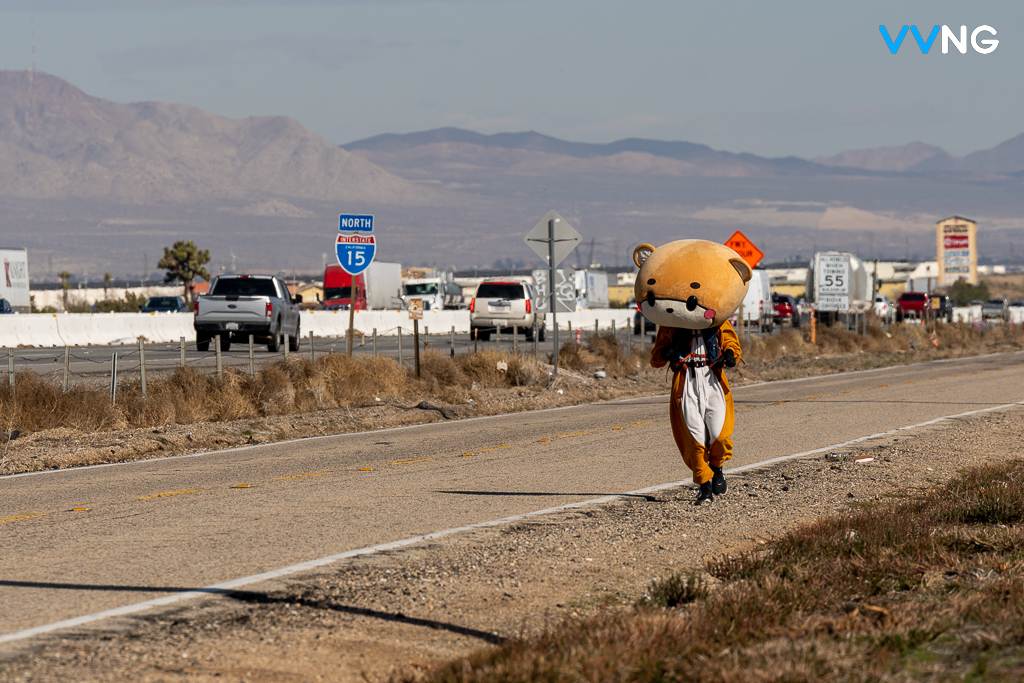 HESPERIA, Calif. (VVNG.com) – Jesse Larios, better known as Bearsun, completed his goal to run across America from New York to Los Angeles while outfitted in a bear suit.

His 3,015-mile journey began on November 7, 2022, from the George Washington Bridge in New York, which crosses the Hudson River between Fort Lee and Upper Manhattan.

“This run is dedicated to everyone who’s been having a hard time dealing with any mental Illness, disease, physical health, finances, or feeling dis-attached from themselves,” Bearsun said on his website.

In 2021, VVNG staff caught up to Bearsun as he ran along Mariposa Road in Hesperia during his first trip from LA to NY, in which he organized a GoFundMe fundraiser to benefit Autism Society of America, Inc, raising $19,122.

Bearsun explained how he struggled with failure in 2022 and said part of his running is how he copes, reminding himself that failure is part of the human experience that allows us to grow.

“This is why I’m here”, he said, “It only takes you to get started and make things happen for yourself. Don’t wait for the perfect time, create it.”

This was not his first attempt at completing the long trek across America, not even his second, but his third. A reminder to himself and others, he said, that no matter how many times it takes to reach your goal, keep trying, because each attempt only builds character.

On the first attempt, he said his “mind collapsed” and he was unable to finish, and on his second attempt his body collapsed, and he became physically ill with bronchitis and a foot injury.

“Now here I am, third attempt all in 1 year,” he said last year at the beginning of his journey. “I couldn’t let it go, I won’t let it go. I said I was “All in” when I set my mind on this task. No matter how hard life hits, I won’t let myself down. Come hell or high water, I will get it done.”

Jesse Larios said he was thankful for everyone he met along the way, and was still in awe of what he was able to accomplish with a determined mindset.

“It hasn’t sunk in yet that I’ve made it this far after struggling the entire last year to get to this point. I just want to run wild these next few days and soak it all in. I’m coming to Los Angeles! I’m coming home,” he posted on social media days before he completed what he called the Run Across America & Bearsun’s Final Journey.

“Safe travels Bearsun! Bless you! Praying for protection over you and thank you for standing in the gap for all those dealing with mental health and so many other issues. That is so awesome! Thank you!” wrote VVNG member Mars Edith, in the Victor Valley News Group on Facebook.

On his website, IamBearsun.com, Jesse Larios sells merchandise such as shirts, and even a stuffed mini version of Bearsun character he runs in.

This year he also introduced an 11×14 print that he designed and named Run Across America, which the art piece illustrates the bear running across a map of the exact States he ran through during his journey, with the bear reaching the finish line, the “goal.”

“I had to learn how to be more connected with my body, mind, spirit, nature, and humanity. This illustration represents the world that I had to go through in order to find balance not just within myself but with the world around me.”

Anyone wishing to support Bearsun may do so by following him on his various social media platforms or purchasing from his catalog on his website, IamBearsun.com.