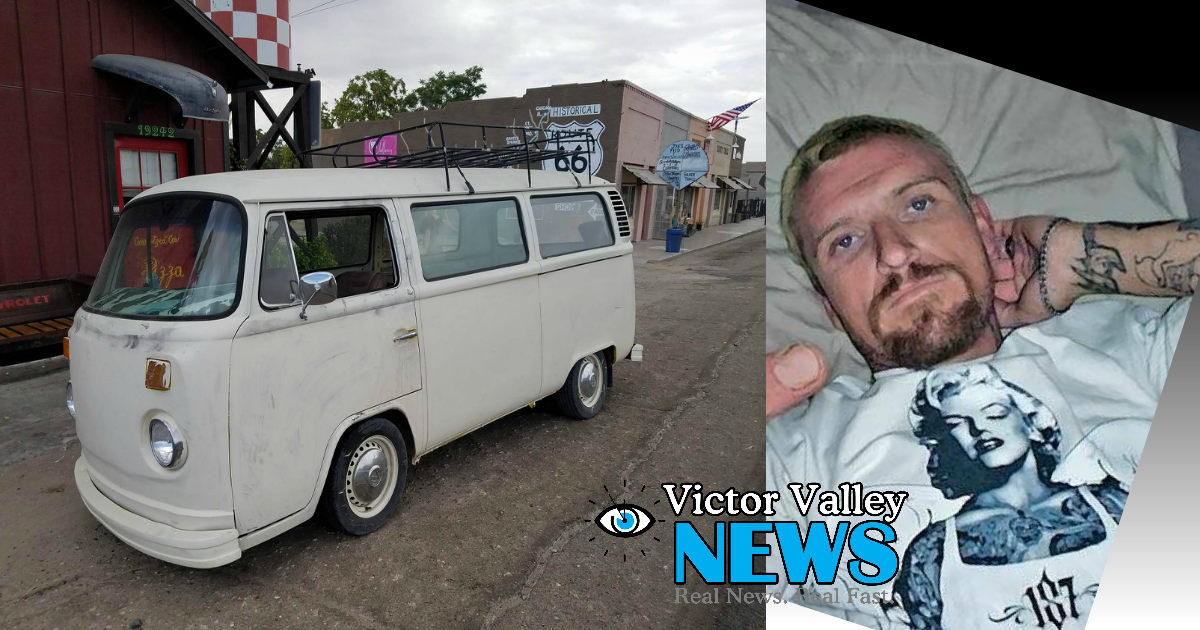 ORO GRANDE:(VVNG.com)- Authorities have identified the Barstow man arrested in connection with the theft of the iconic VW Cross Eyed C0w bus.

The bright yellow and white 1975 VW bus was reported stolen in the early hours of Tuesday, June 14th outside the business located at 19242 National Trails Highway in Oro Grande.

On Monday, June 27th, Victorville resident Lacy Smith was traveling south on the 15 freeway in Victorville when she spotted the bus.

Lacy immediately called 911 and reported the sighting. Lacy told authorities the van had been painted white, the surfboard and the checkered luggage had been removed. Even though the bus was clearly altered to change its appearance. One thing the thief forgot to hide was the very distinguishable cow print upholstery.

Lacy continued to follow the bus into the city of Rancho Cucamonga and that’s when police and a helicopter eventually took over. Sheriff’s officials located the abandoned bus at the intersection of Day Creek Boulevard and Highland Avenue.

Witnesses told police a male, later identified as 33-year-old Kenneth Jessie Callaway, had exited the vehicle and fled. Authorities located and arrested Callaway at Day Creek Boulevard and Silverberry Street, just a few blocks away from where he ditched the bus. Callaway was arrested after being positively identified as the driver of the stolen bus.

According to court records, Callaway was booked on receiving known stolen property. As of 5pm. on June 28th, Callaway posted bail and has no scheduled court appearance.

Cross Eyed Cow Manager Danielle Boyd told Victor Valley News, they are presenting Lacy Smith with a $1,000 check on Friday, not only as a reward but for putting her life in danger.