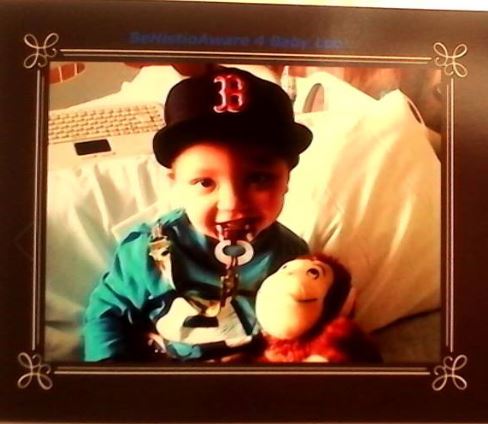 (VVNG.com)- Vanity Hernandez is the mother of three children, Josiah 11, Chastity 8 and Leandro (baby Leo), 2.  At approximately 18 months old baby Leo began not feeling well and having changes in his appearance. Symptoms noticed were a decrease in appetite, he was not as playful, his stomach had become larger, and he had developed a rash on his head that resembled cradle cap.

Vanity took baby Leo to the Pediatrician, who felt he was nothing to be worried about and that he possibly had Psoriasis on his scalp causing the rash. He provided antibiotics and recommended a specific shampoo. Weeks later the symptoms not only continued but worsened, baby Leo became agitated and difficult to console at some points due to the pain he was in.

On August 19, 2013, after Leo woke up with a rash covering his entire body Vanity took him to St. Mary’s Hospital in Apple Valley. At St. Mary’s they found the spots were Petechiae that was caused due to low platelets. Doctors warned his mother that this meant that baby Leo was suffering from some form of cancer. Baby Leo then went to Loma Linda hospital for testing. The testing required took approximately a week.  On August 23rd baby Leo was diagnosed with Multisystem Langerhans cells Histiocytosis (LCH).

Vanity’s first thought was wondering what this was and what it meant for her young son.  She then asked for an explanation from doctors. Soon, after getting very limited answers from doctors due to limited knowledge surrounding his illness, Vanity then began to realized the rarity of  her son’s condition.

“ After doing some research myself, since Loma Linda staff was not able to provide me with answers, I have learned that 1 out of 220,000 children may be properly diagnosed before age 5.” said Vanity. Upon doing continuous research Vanity found that LCH was not true cancer, but in reality was not much different.

“My son’s body was being attacked by these “Cancer cells” that were rapidly multiplying. It had attacked his Liver, spleen, and bone marrow, lesions were found in his mandible, skull, and sphenoid bone. He was needing blood and platelets transfusion every other day, his marrow was covered in this disease and not producing what is was capable of,” shared Vanity about her son’s illness. According to Vanity, Loma Linda was unable to provide proper care for her son’s rare condition and they would simply treat the pain.

Leo was transferred to City of Hope, where the doctor shared that the survival rate was only about 30%. “I have never felt so scared in my life! They immediately began scanning him and re-doing all the testing before they start their chemo schedule,” said Vanity. When baby Leo

started on his chemotherapy they soon found it made the young child feel more ill, which led his family to a greater feeling of helplessness. Leo is continuing his treatment at the City of Hope as an outpatient at this time.  On August 5th on Leandro Payan Community Page, Vanity updated her son’s progress with the following:

“It has been a little over a month now that he has been home since he was last admitted for the bacteria growth in his blood. This is amazing to see everything he has accomplished and has fought to get through. I can now finally say I can see the light at the end of the tunnel.”

Vanity is planning a party called the “BeHistioAware Celebration for Baby Leo”, the party will take place a little over a year from his diagnosis and will celebrate the life of what his mom calls her little Histiowarrior.  The event will include entertainment for the whole family including characters, Lulu the clown, face painting, Dale the DJ Dude, Mickey and Minnie at 3:00-4:30 p.m., Frozen girls Ana & Elsa 4-5 p.m., and Spiderman & Batan 5-6 p.m. and free food. There will also be raffles of items there so make sure to bring some cash. Vanity is asking that those who attend bring a $10 minimum gift to the door or make a $10 donation.  All of the proceeds for the entire event will go to City of Hope Pediatric Center. The party will be on August 30th from 2-10 p.m. at 17485 Catalpa St B3 in Hesperia.