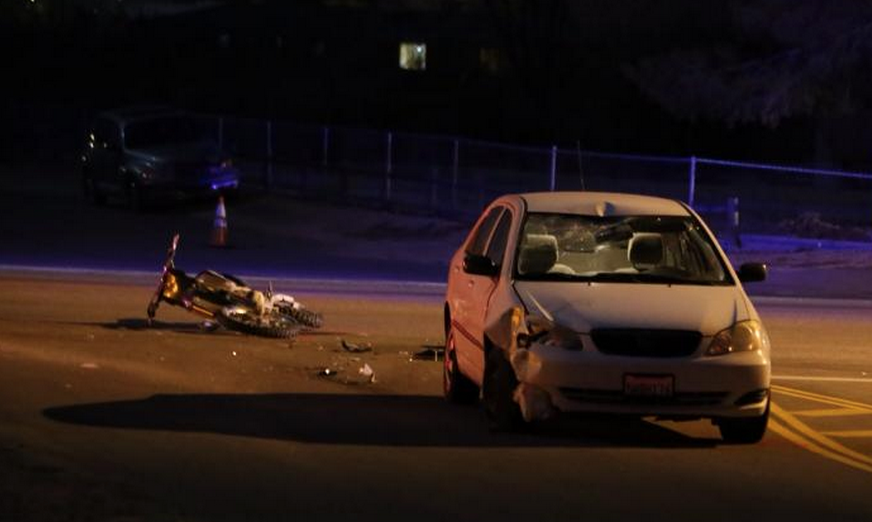 APPLE VALLEY: A 17-year-old male was airlifted to an out of area hospital for his injuries after crashing his motorcycle in Apple Valley on Tuesday evening.

The collision happened just before 5:30 p.m. at the corner of Corwin road and Wintun road.

The injured teen is identified by family as Apple Valley resident Anthony Cardenas, 17, and a student at Granite Hills High School in Apple Valley.

According to a press release, through the investigation it was discovered the 17 year old juvenile male was operating a dirt bike west on Corwin Road with no lights.

A female driver of a Totoya Corolla was traveling east on Corwin road and attempted to make a left turn onto Wintun road. The driver of the Toyota did not initially see the motorcycle due to the motorcyclist having no lights. At this point it’s unclear if the driver used her left turn signal at the time of the impact.

The motorcycle collided with the vehicle causing the motorcycle rider to be thrown several feet from the collision, per the release.

First responders arrived along with the Apple Valley Fire Department and performed live saving measures on the scene, and the young man was quickly flown via air ambulance to Antelope Valley Hospital Trauma Center for treatment of major injuries.

The driver of the vehicle remained at the scene and assisted officials in the investigation.

Family member Zoeie Nottle gave an update on the condition of Anthony Cardenas, stating he is stable but very hurt. He received a ruptured spleen, broken femur, fractures to his cheek bones and requiring blood transfusions. “The road to recovery won’t be easy”, she say’s as he will require 7-8 months of therapy before he is able to walk again. “Poor baby, he was on track to graduate in 4-months with honors”.

The collision is currently under investigation by the Major Accident Investigation Team (MAIT). Anyone with information is encouraged to contact Deputy Jason Grantham at 760-240-7400.

Related Topics:accidentApple Valley
Up Next