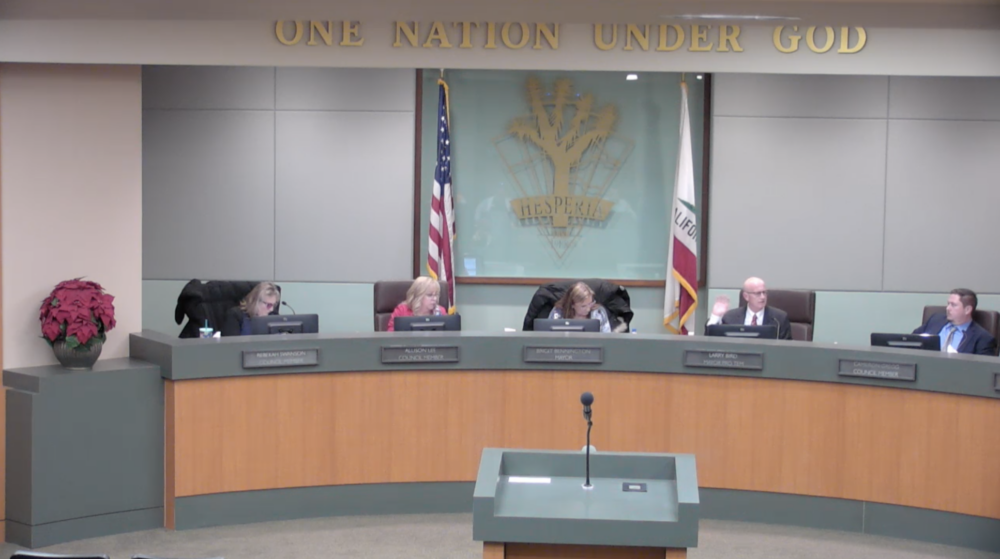 HESPERIA, Calif. (VVNG.com) The City of Hesperia says its position was ‘mischaracterized’ after the attorney’s office representing the owner of property near a golf course said the consideration for eminent domain “appeared to be a land grab.”

On December 20th, during a regularly scheduled city council meeting, council members were to vote on whether or not they will proceed with starting the process of eminent domain to acquire property from an owner in which the city previously leased from the owner.

The 15.5-acre property described in the resolution is located on Buckthorn Avenue, north of the Hesperia Country Club and Golf Course, as previously published by VVNG.

The property belongs to Mega Factors, and for over the past 10 years, the City has been leasing the property and using it as a driving range at the city-owned Hesperia Country & Golf Course, but the owner said they no longer wanted to lease the property to the City, prompting the city to seek eminent domain.

“The issue is that a driving range is required for the golf course, which is a public golf course, and it is for the benefit of the public’s use,” stated City of Hesperia Attorney Pam Lee.

“And so as part of that, the City does seek to continue to use the property as a driving range for public use, and in addition to facilitating additional walking paths and recreation trails for the public benefit, and so, therefore, we’re requesting that eminent domain proceedings be commenced for this property,” said Lee.

Eminent domain power is subject to certain constitutional limits such as the property acquired must be taken for “public use;” the owner must be paid “just compensation” in exchange for the property, and no person must be deprived of their property without due process of law.

During the presentation, the City’s Attorney said part of the public interest and necessity to acquire the land was for drainage purposes, which was not specifically mentioned in the Resolution of Necessity previously.

The City said the drainage would be a need or necessity “considering that the property is quite steep, and there is a slope and there are additional drainage and percolation and soil and water erosion issues,” adding that there is a retention basin adjacent to the property, “that is all part of this project,” said Lee.

The Attorney representing Mega Factors said there were several “major defects” with the City’s resolution.

“First there are problems with the City’s quote un-quote project, the description has inexplicably changed many times, and even the description of the project provided by the City staff presentation this evening does not match the projects described in the resolution of necessity,” the attorney for the property owner told Council Members via phone call.

“Second there are serious defects in the City’s appraisals, including valuing the property as two separate appraisal zones as un-entitled land, and the use of non-reflective and outdated comparable sales,” stated Mega Factors’ legal team, who said a formal objection letter was sent to the City on Friday, December 16.

The attorney also alleged that the city failed to comply with CEQA (The California Environmental Quality Act) for its project, saying no exemption is identified by the City.

“There doesn’t seem to be an applicable exemption to CEQA review for this project,” the property owner’s attorney said.

Mega factors said they recently provided a copy of its own appraisal report to the city to attempt to reach a resolution through good faith negotiations,

The City said it hired a third party to appraise the property for fair market value in December of 2021, then presented an offer the same month to the owner based on that third party appraisal.

The City confirmed receiving an appraisal report from the property owner, but described it as “quite a ways off.”

“Instead of making a proposal that is equivalent to ours, the appraisal they keep coming up higher and higher. That is not buildable land, it will cost millions of dollars for them to be able to develop that land, and as far as the parks go, we purchased that golf course from the parks and have made it from losing money to gaining money, and it does need some work, I agree,” said the City’s Mayor, Brigit Bennington.

“However, we are moving forward and it is making us money, and you have to have a driving range with the golf course. And I do like the idea of the public walkway, and the greenway around a golf course when there is quite a bit of residential there, and I think we would utilize it. We don’t have any walkways, besides Civic Park, which we also own, or the aqueduct that we definitely don’t own,” the Mayor added.

City officials said they gave a deadline to the property owner to provide an appraisal report to the City for consideration by Thanksgiving of 2022.

When the City did not receive the report by Thanksgiving, it issued a letter of a notice of intent to adopt a resolution of necessity on December 1, 2022, informing the owners of the hearing that was scheduled twenty days later on December 20th.

“The City should not adopt this resolution of necessity and fix these issues that we identified in our formal objection letter, including complying with CEQA, and to seek to acquire the property through good faith negotiation, not condemnation,” the property owner’s attorney said.

The property owner’s legal team further said, “the public use is suspect, appearing to be a land grab to transfer to another private-property owner.”

Land grab usually refers to a swift acquisition of property often by fraud or force.

“The project will be owned by the City, it continues to be open to the public and so it is not going to be transferred to any other private party, it’s a municipal-owned golf course, although it’s operated and managed by a private company, the City will continue to own this parcel, as well as the rest of the golf course,” said Pam Lee, the City’s attorney.

“We eventually can sell this to another entity, if they would like, but right now this belongs to us, and as it belongs to us we need to look at it, making the most feasible use for our citizens.

Council member Cameron Gregg said “One of the biggest things I think all of us should consider up here is the ‘necessity’ factor of this. The City’s been leasing this property for over 10 years, we should have had the foresight to say hey, the golf course doesn’t have a driving range, and if it’s a necessity, we shouldn’t have been leasing it, and leaving up to chance, essentially based on a contract with a third party.”

“There’s other necessities that I know are involved here, whether it’s reclaimed water resources that are now expiring down at the golf course, but that’s not built into this, this is primarily for a driving range and walking paths. I think that we need to go back to the drawing board, look at feasible places to put a driving range, if that’s the true nature of this, and if it’s not the true nature of it, and it requires a necessity adoption of this land, then it needs to be for a higher necessity such as reclaimed water,” Council Member Cameron Gregg said.

A Hesperia resident, who identified himself as a concerned citizen, stood and spoke in front of the council members.

“I feel that a golf driving range does not meet the requirements of a public necessity. A public necessity would be roads, drainage, and utilities. Trying to take someone else’s land because they decided not to lease it to the City anymore is unjustified. If the City starts taking land at any time because they feel it’s ok, where does it lead to in the future? As far as the drainage next to it, it’s off the land, so you already have that.”

The speaker also stated that having a walking trail through a drive range was not ideal and seemed unsafe.

Nils Bentsen City Manager responded and said, “Many of the statements have just mischaracterized the City’s position, we’ve been negotiating for over 8 years on this property, so it isn’t something that just happened overnight, its something that the people that have not read all the reports may just think we’re trying to grab land from somebody, that’s not the case at all. We’ve been trying to do this for over 8 years, we’ve been working with the property owner, and they had agreed to sell the property,” stated the City Manager.

“The project had morphed over the years because originally all we were interested in was a driving range, we didn’t want all the property. the property owner wanted us to take all the property, as part of this deal we didn’t want. Well, things have changed over the years,  because we received funding for walking trails, and despite what the speaker said, the walking trails are well thought out with screening from balls, we’re not just putting a trail through the middle of a driving range,” Bentsen stated.

He added that the suggestion of extending the agenda item for 6 months was not going to do it for the city either.

“What we’re requesting on the reclaimed water portion requires a completed plan and CEQA, there’s no way that that happens in 6 months,” stated the City Manager.

Council Member Gregg asked, “why is their property on our time frame, it should be on their timetable, it’s their property. They purchased the land legally,”

Council member Gregg said, “the city shouldn’t be in the business of recreation and park activities, that’s why we have a Recreational Park District.”

Larry Bird said, “I do agree with you that we are not normally in the recreation and park business, however, we have a civic park that’s ours, we have other things that Rec and Park does that people don’t understand, like lights.”

“We have grants that we have already applied for and received, we have done things, and they have been negotiating for eight years,” stated Larry Bird. “What they’re doing is they’re holding is hostage with this, not vice versa.”

The City’s attorney said the City still wanted to be able to move forward with negotiations, in case a settlement was not reached.

”We’re moving forward with this hearing tonight in the event that negotiations continue to stall,” the City’s attorney said.

In order to pass the Resolution of Necessity, it would have required 4 out of 5 votes, but the motion failed with both Council Members Gregg and Swanson voting against the resolution, and Mayor Bennington, Council Member Lee, and Mayor Pro Tem Bird voting in favor.

This is one of two hearings that took place that night The second Notice of Resolution of Necessity for a 19-acre property near the California Aqueduct received a passing vote.

With No Response From Owner; Resolution Passes to Allow Eminent Domain Takeover of property near aqueduct