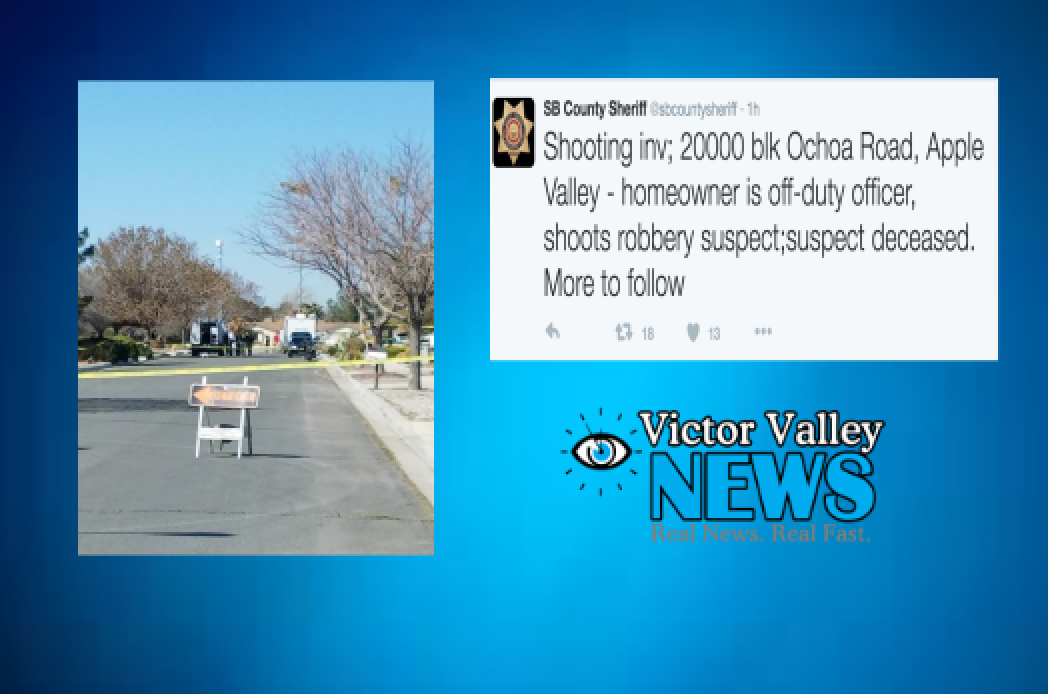 APPLE VALLEY-(VVNG.com):  It appears that an attempted robber chose the wrong home at around 5:40 a.m. Wednesday morning.  The home that he chose, on the 20200 block of Ochoa road near Rincon road belonged to an off-duty Fontana police officer.

Per scanner traffic an off-duty officer called dispatch reporting “suspicious circumstances” when he found a man attempting to steal a motorcycle at his home. A Sheriff’s Press release released Wednesday afternoon indicates otherwise saying that the officer woke up to the armed suspect inside his home attempting to steal property.

The conflicting information is unclear as of Wednesday afternoon, but area residents believe the shooting was justified.

He identified himself as an off-duty officer to the suspect and demanded the man to put his hands down, but the suspect failed to cooperate.

The subject reached for a gun that was at his hip area, causing the officer to discharge his weapon at around 5:43 a.m. The officer advised dispatch that the suspect was down with a gunshot wound to his upper torso.

The suspect was transported to St. Mary’s Medical Center  where he was pronounced deceased at 6:22 a.m. The officer was not injured as a result of this incident.

San Bernardino County Sheriff’s Homicide Detail arrived at the scene to conduct an investigation. Anyone with information regarding this investigation is urged to contact Detective Scott Thies at (909)387-3589. Callers wishing to remain anonymous are urged to call the We-tip Hotline at 1-800-78-CRIME (27463) or you may leave information on the We-Tip Hotline at www.wetip.com.