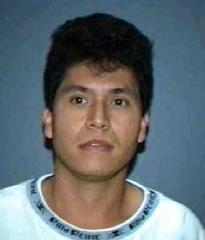 Detectives from the Sheriff’s Cold Case Team arrested Artemio Juarez in Los Angeles for a 1998 murder in Fontana.

SUMMARY:
Original Release in 1998: On Sunday, February 15, 1998 at approximately 2:08 p.m. Sheriff’s dispatch received a 9-1-1 call regarding a possible dead body found in a room at the La Villa motel. Deputies from the Sheriff’s Fontana Station and medical personnel arrived and found Mr. Medina deceased on the floor. Investigators from the Sheriff’s Homicide Detail were requested and are investigating the case. The exact cause of death is unknown pending an autopsy. Anyone with information is requested to contact the Sheriff’s Homicide Detail.

In 2012, the Sheriff’s Cold Case Team reviewed the homicide investigation. The Sheriff’s Scientific Investigation Division and Cal-ID re-examined the evidence and identified Artemio Juarez as a suspect based on physical evidence located at the scene. On Wednesday, April 17, 2013, at 11:20 p.m. Detectives from the Sheriff’s Cold Case Team arrested Juarez in Los Angeles for Medina’s murder.
Additionally, Investigators believe there was a third person in the motel room that could have information about the murder.

Anyone with information is urged to contact Cold Case Detectives Ryan Ford or Jerry Davenport at (909)387-3589.

The Cold Case Team consists of a Criminalist, a Deputy District Attorney and two Homicide Detectives. The Cold Case Team is funded in part through a “Solving Cold Cases with DNA” grant from the US Department of Justice.