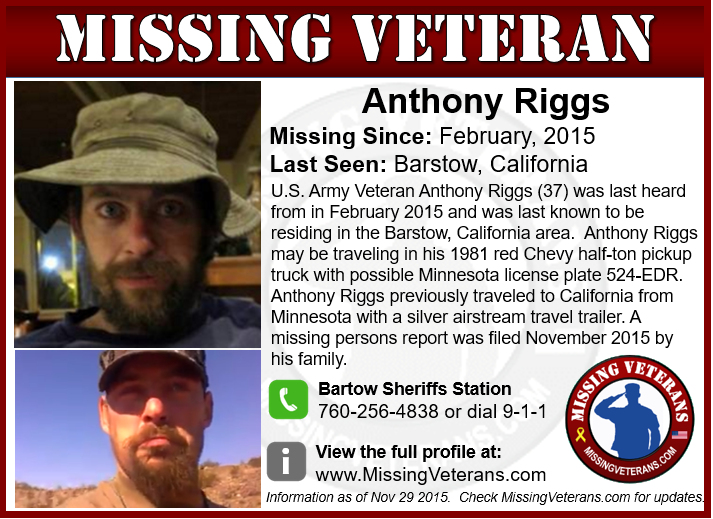 BARSTOW-(VVNG.com)- A U.S. Army Veteran that suffers from Post Traumatic Stress Disorder (PTSD) was reported missing by his family in November.  The Missing Veterans Facebook page said that Anthony Thomas Riggs served in the U.S. Army and was deployed to Iraq for Operation Iraqi Freedom.

The 37-year-old veteran left his parents Minnesota home in his 1981 Chevrolet half-ton pick-up truck with silver airstream travel trailer. Anthony Riggs traveled to Barstow, which according to his parents he made his home on the 28700 block of Community Boulevard.  Family is concerned that Riggs is possibly off his prescribed medication.

Riggs’ family said that they have not seen or heard from since February 2015. Riggs is described as 5’9” tall, 150 pounds with a large scar along his back and he may be missing his two front teeth. Anyone with any information regarding the whereabouts of Riggs  should contact the San Bernardino County Sheriff’s Barstow Station at (760)256-4838.