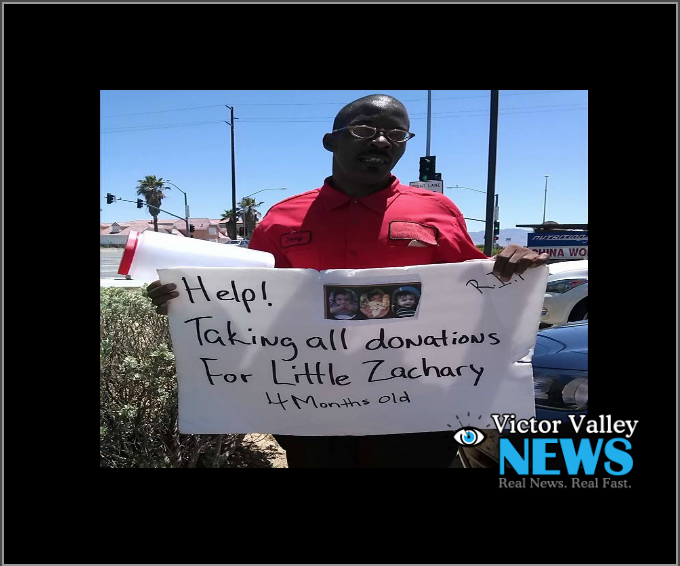 VICTORVILLE-(VVNG.com): Victor Valley residents have raised concern about the teams of young men and women wearing red shirts and black pants collecting funds for the funerals of local families.

The organized team is headed by local restaurant owner, “Johnny”, of Johnny’s Dis and Dat Soul Food Restaurant and More in the city of Victorville. Johnny calls these people his “street team”, according to workers who say that he picks up these young adults and places them in several locations to collect money from the public. These young adults hold signs requesting burial funds for random tragic deaths, mostly those of children, in the High Desert.

Local media has helped push people into their fundraising efforts, likely unaware of the legitimacy of those collecting the funds. The public, many of whom gained trust for Johnny Dis and Dat Soul Food Restaurant and More due to the positive publicity have began to wonder if they made the wrong decision.

Johnny told Victor Valley News in a telephone conversation on July 27, 2015 that the business is non-profit called “Cry For a Second Chance Teen Work Program”. He claimed the business was out of Nevada, but through research and through speaking with an official with the Nevada Secretary of State’s office, there is no Nevada Corporation through that name, trademark, trade name, service mark, reserved name or business license.

Through additional research, a nonprofit corporation by the name of,”Crying for Help Teen Work Program Inc.” was found to be owned by Junita and Johnny Crummie. Two other corporations with similar names, none being the exact name that Johnny Crummie provided, were also found to be associated with the couple have been revoked for unknown reasons.

Johnny offered to meet with a Victor Valley News reporter at his restaurant at which time the Victor Valley News reporter agreed as long as a video camera would be welcomed. Johnny replied with his voice raised, “I want to talk face to face in person. We don’t talk on camera!”  When the reporter offered to meet with Johnny at the Victorville Police Station off camera, he apparently was unwilling to do so since he hung up without replying following that offer.

The non-profit that he said is called, “Cry for a Second Chance Teen Work Program,” according to Johnny, gives 90% of funds to the family of those deceased.

In a statement made by a former employee who asked to remain anonymous, alleged that each worker must produce at least $200 per day, if they receive $200 the worker gets $60, the family gets $40 and the restaurant gets $100, meaning the family gets 20% of the funds collected. “He does pay $10 an hour to be out there. He told us to tell anyone who’s donating that we don’t get paid he’s also working on starting it down the hill he calls them his street team,” said the former employee.

On July 11th a woman by the name of Jess Mari Mudo shared a Go Fund Me campaign on Victor Valley 411 and on her Facebook wall, according to Mudo, on behalf of a deceased baby by the name of Zachary. Zachary tragically died in mid-April following the alleged abuse by his mother’s now ex-boyfriend, 24-year-old Hesperia resident, Tyron Bookman. In the Facebook message, Mudo, the creator and the person who would have access to all funds once the campaign was complete, said she was a current employee of Dis and Dat Soul Food Restaurant and More. She went on to say that her boss “Johnny” had a contract with the mother of Zachary, Rebekah Rinaldi, saying that Johnny could collect on her behalf.

On July 13th, again Mudo made a new post asking for support with fundraising efforts, this time for Kevin Lucas, who was found deceased on Seventh Street near the Ranch Market shopping center in Victorville on July 13th. Mudo said, “we were contacted by and are meeting with the family tomorrow to start collecting funds for the funeral. I don’t know what you need this time to legitimize, but with their permission a go fund me site will be made.” When asked for contact with the family, she was again unable or unwilling to provide that.

A local business owner, who asked to remain anonymous due to his fear of retaliation, said that the owner Johnny told him they make $5,000 a day from donations so he needed security. “If you ask me he is just scamming people out of money and using his restaurant as a front,” stated the anonymous business owner. He also shared that before he took on this new business of collecting for burials, he was unable to pay rent for his restaurant.

Johnny’s past employee who was fired just days ago for not bringing in the $200 a day minimum, stated the paychecks she received were drawn from the Dis and Dat Soul Food Restaurant and More bank account. The California Board of Equalization officials said a permit would be needed in order to collect, even if it was being collected as a charity. The charity would then draw a check from the bank account owned by the charity to pay any employees.

Some of the families of the deceased collected for have been contacted, but have not yet been reached at this time. Information will be updated as it is received.