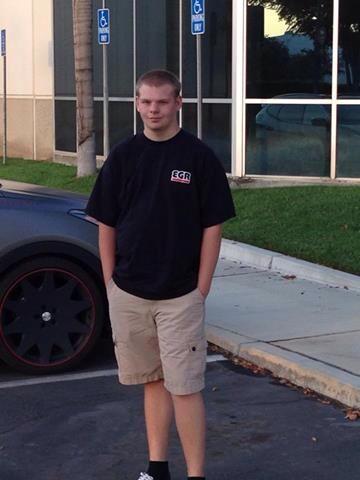 APPLE VALLEY:(VVNG.com)- A 16-year-old teen died after being involved in a major traffic collision just after 10:00 p.m., on Saturday July 26th.

According to family, Cody and his cousin 18-year-old Jesse Ribaudo, were on their way home from Cody’s brother’s house prior to the accident.

The two vehicles are described as a red Ford Escape, that was being driven by Ribaudo and a white pick-up truck driven by an unidentified female driver. The impact of the collision caused both vehicles to overturn, leaving one on it’s side and the other vehicle on its roof.

The female driver, who witnesses say was responsive following the accident, was fitted with a cervical collar. She was then transported by ground ambulance to St. Mary’s Hospital with unknown injuries. Robaudo, managed to exit the Ford Escape on his own and upon emergency crew arrival he was transported via ground ambulance to St. Mary’s hospital, where he was then airlifted to Loma Linda University Medical Center in Loma Linda.

Ribaudo’s injuries are not thought to be life threatening and is recovering from what his family describes as soreness as well as other superficial injuries. According to his family, “he is awake for Cody”.

16-year-old , Cody Michael Spear who was preparing to enter the 11th grade at Apple Valley High School unfortunately was trapped in the vehicle and succumbed to his injuries. “He loved his family so much, he was excited to start his first job that he recently started with his father. He enjoyed the outdoors, and being with his friends from school. He was into cars, his room is filled with car posters like Honda’s, Fast and Furious, Mustang’s and he was sociable to anybody,” remembered his sister-in-law, Lorraine.

The exact cause of the accident is unknown at this time. According to scanner traffic, officers requested a blood sample for at least one of the drivers to rule out alcohol or drugs as being a factor in the fatal accident. More information will be updated as it becomes available.