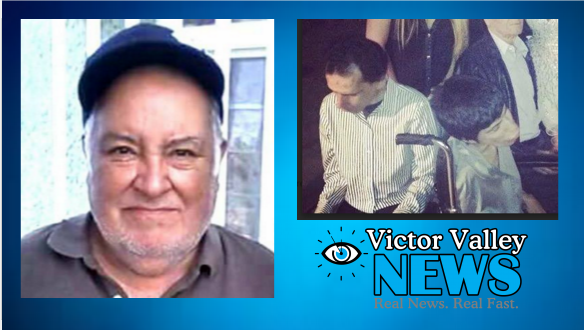 APPLE VALLEY-(vvng.com): An Apple Valley man accused of keeping his two disabled adult children living in both deplorable and neglectful conditions is now running from the law in order to avoid prosecution. On September 12, 2014, after Isabel Sandoval, the sister of the two victims made several  reports to Adult Protective Services (APS) and the Sheriff’s Department, the two disabled adults were found in what is described as “inhumane conditions” by Apple Valley deputies.

According to, Sandoval, the two were deprived of food, forced to lay on a filthy mattress, locked in their bedroom and the deputy found the male victim handcuffed to his bed. The two were described as emaciated due to the lack of food given to them on a regular basis.

“Unfortunately (and surprisingly) the deputies did not immediately incarcerate the perpetrators, Rafael Gonzalez, their birth father and Socorro Ramirez, their step-mother. Neither of the abusers is related to me.  Rafael immediately fled the country, he went to Mexico for a month,” said Sandoval. Sandoval shares a mother, who is now deceased with her two disabled siblings. “ It is my understanding that he travels back and forth from Tepatitlan Jalisco Mexico to Apple Valley and San Jose, California.”

Socorro Ramirez is currently in jail and is being held to answer to the  two felony counts of causing great bodily harm to dependent or elder. At her preliminary hearing, photo evidence showing a foot of one of the victims chained to the bed of the bedpost, and feces on the floor of the victim’s room. Socorro Ramirez is due in court on Friday, January 29th for an arraignment on information hearing and is being held on $200,000 bail.

Meanwhile, Rafael Gonzalez continues to elude authorities by traveling back and forth to Mexico, Sandoval said. She said that on several occasions she felt as though her concerns went unheard as she reported the conditions her siblings were living in. She said she made the initial report to APS on August 21, 2014, and again on September 10, 2014, during which time she also made a report to the Apple Valley Sheriff’s department. “Once the father found out I had reported him and his wife he called the police on September 12, 2014, to place the blame on his wife. That is when the police finally made a thorough investigation and found my siblings,” said Sandoval.

The two victims are now living with Sandoval in Santa Clara County, she has conservatorship over the two since December 2014. She now would like people to watch for the father of the victims, Rafael Gonzalez so he too can face charges for what she believes he took part in.

“There needs to be raised awareness of the importance of protecting individuals like my siblings, who do not have a voice and are unable to fend for themselves. There are many individuals with special needs that suffer at the hands of their parents, relatives, and/ or caregivers,” added Sandoval.

If anyone knows the whereabouts of Rafael Gonzalez they are urged to contact the San Bernardino County Sheriff’s Department, Apple Valley Station at (760) 240-7400.  Callers wishing to remain anonymous are urged to call the We-tip Hotline at 1-800-78-CRIME (27463) or you may leave information on the We-Tip Hotline at www.wetip.com.