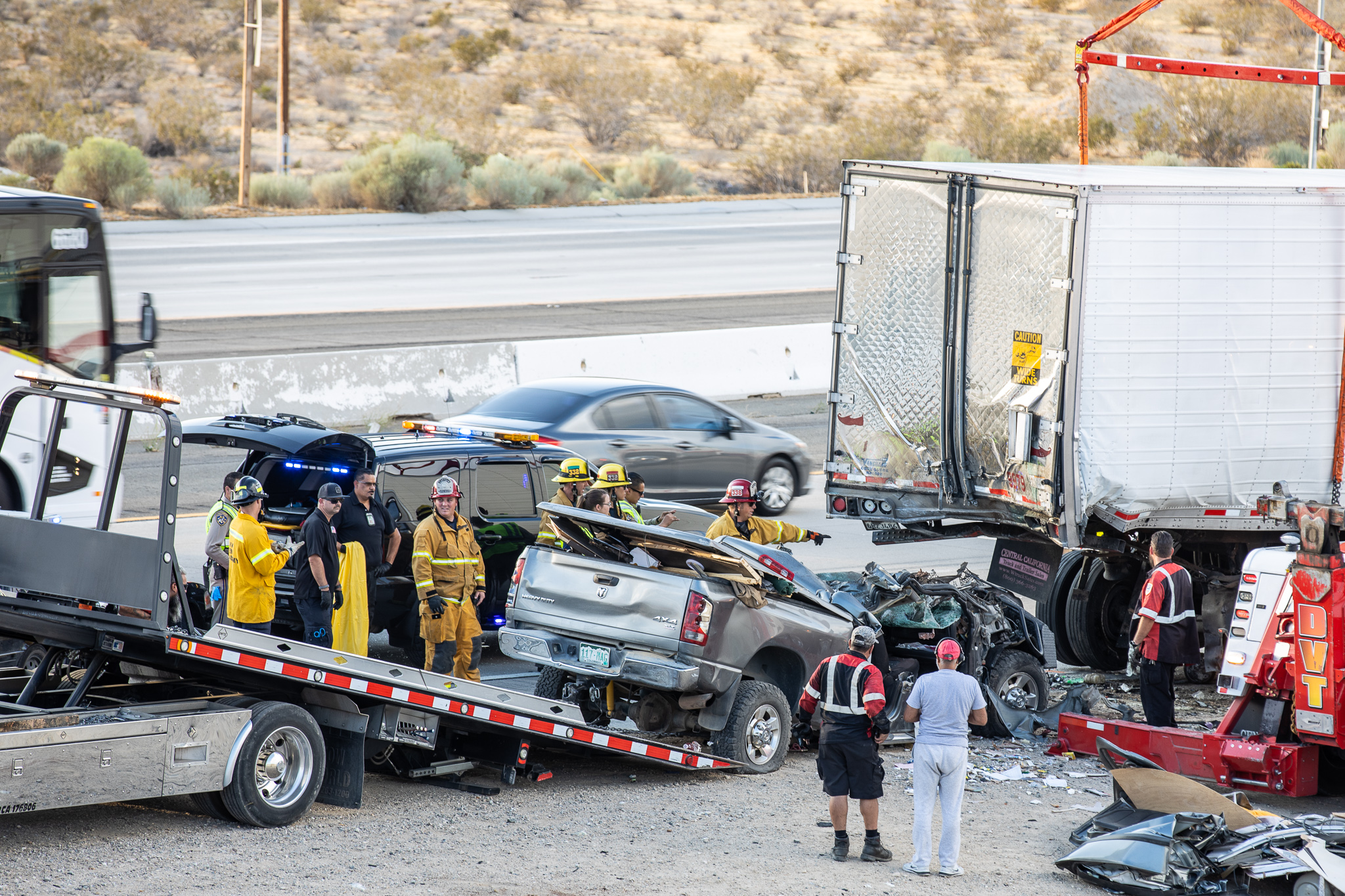 APPLE VALLEY, Calif. (VVNG.com) — The California Highway Patrol said they are continuing to investigate a crash on the I-15 freeway that killed an 84-year-old Apple Valley man Thursday.

On July 25, 2019, at approximately 2:09 pm a 44-year-old male from Fremont, CA was driving a 2014 Freightliner, towing a 2014 Utility enclosed box trailer, northbound on Interstate 15, south of Stoddard Wells Road, when his vehicle began to overheat.

The driver pulled to the east shoulder to inspect his vehicle and was standing near the engine compartment when a 2005 Dodge Ram pickup, towing a 2017 Sonoma travel-trailer slammed into the rear of the semi.

“For reasons still under investigation, the driver of the Dodge pickup allowed his vehicle to drift onto the east shoulder of Interstate 15 where it collided with the back of the disabled truck tractor combination,” stated CHP officials.

The impact caused the entire cab portion of the pick-up truck to crush underneath the trailer of the semi.

Firefighters from the Apple Valley Fire Protection District responded to the incident and located a female passenger trapped inside the truck but were unable to locate the driver, scanner traffic reported.

After extensive extrication on the passenger firefighters managed to free the woman from the mangled wreckage. A Mercy Air helicopter landed on the freeway and transported her to Arrowhead Regional Medical Center with major injuries, officials said.

Firefighters located the male driver inside the truck and pronounced him deceased at the scene.

Traffic on the northbound 15 freeway was snarled for several hours as a result of the incident. CHP shut down the northbound for over an hour causing traffic to back-up to Bear Valley Road.

At about 6:30 pm two heavy-duty tow trucks worked together to lift the trailer while the other pulled the Dodge truck from underneath the semi.

Firefighters extricated the driver from the vehicle. A coroner’s truck was standing by to transport the man.

The San Bernardino County Coroner’s Office will release the identity pending notification of next of kin.

CHP said the investigation is ongoing and anyone who witnessed or has information regarding this traffic collision is encouraged to contact (760) 241-1186.