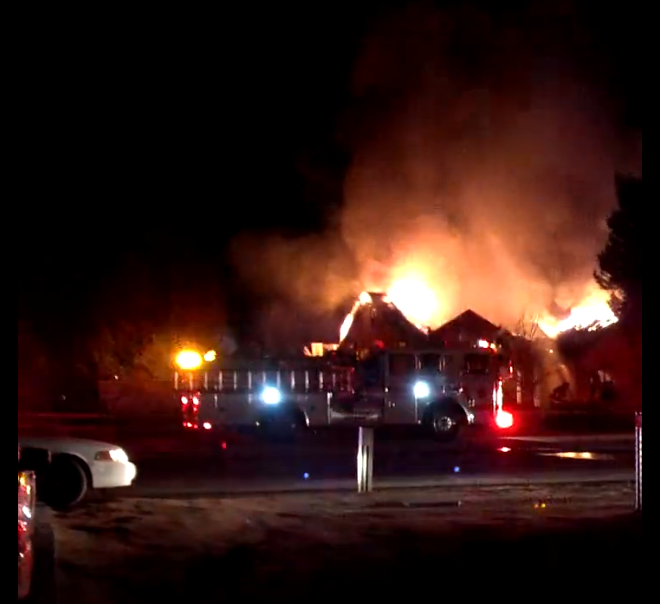 APPLE VALLEY-(VVNG.com):  Two fires broke out in one Apple Valley home on Sunday, January 18th. The home, located in the 16600 block of Navajo Road was reported to be on fire just before 12:30 p.m. According to scanner reports, the home had heavy smoke and heat to the floor, but no fire upon arrival, which lead firefighters to believe the fire had burnt itself out.

The next report came in at approximately 9:00 p.m., Apple Valley Fire Protection District firefighters were dispatched again to the same home. Upon arrival to the second fire, firefighters arrived to the home fully engulfed in flames.

According to initial reports the early morning fire started in the living room of the home. The late night-fire according to preliminary investigations, is believed to have started in a different part of the home.  After the second fire the home is considered to be a complete loss. Firefighters contained the fire and there were no other homes damaged.  No one was home at the time of the fire.

“The house was on fire earlier today and had quite a bit of damage from the first fire. The family was gone, S.C.E. and Southwest Gas had turned everything off. I feel sorry for my neighbors,” said neighbor Sally Mcley.

There were no injuries reported to firefighters or civilians. The total cost of the damages caused by the fire is currently unknown. Both fires are currently under investigation by the Fire Department and Sheriff Department’s Arson investigation teams.

Driver Runs From Accident Scene After Colliding Into Utility Pole