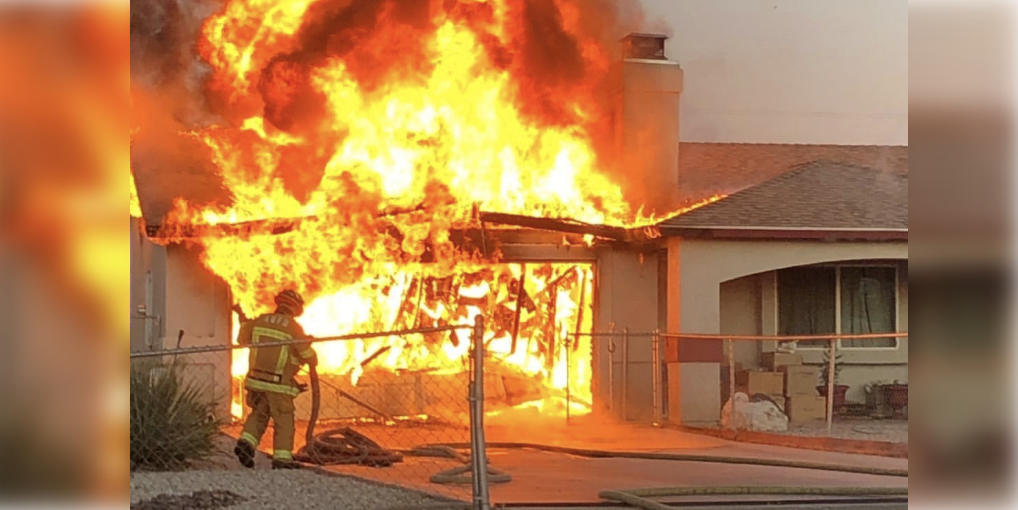 APPLE VALLEY, Calif. (VVNG.com) — An Apple Valley family was displaced from their home after a fire erupted in the garage early Wednesday morning.

Just before 6:30 am Firefighters from the Apple Valley Fire Protection District responded to a residential structure fire in the 12700 block of Lakota Road.

Upon arrival, firefighters located the garage of a single-story home fully engulfed in flames.

Neighbors who chatted about the incident in the Victor Valley News Group on Facebook described hearing several loud pops during the fire.

Two adults and three children had evacuated from the home before firefighters arrived, scanner traffic reported.

Clayton T. Stephens Gomez was on his way to school with his mom when they saw the fire. Clayton told VVNG the children and parents were in shock as they watched their belongings go up in flames.

“Nearby neighbors and concerned citizens, including a man from the school district, gathered with the family to offer their assistance,” stated Clayton. “I want everyone to do whatever they can to help them through this hard time. It was a really hard thing to watch but I am so thankful they are safe.”

Firefighters managed to contain the majority of the fire to the garage and saved the home from being a complete loss.

American Red Cross responded to assist the family that was displaced by the fire.

No injuries were reported by civilians or firefighters and the official cause of the fire remains under investigation.