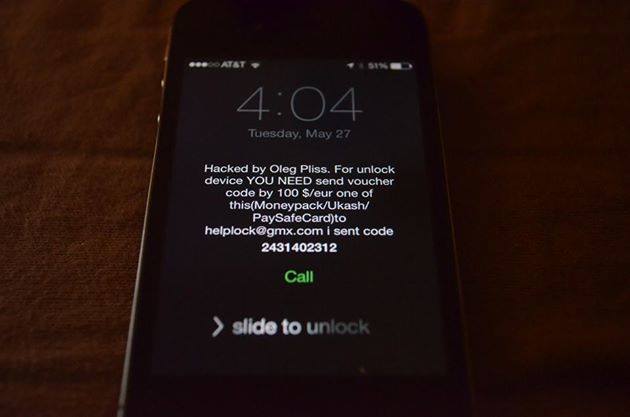 (VVNG.com) – A Victor Valley iPhone user reported that his Apple iPhone was hacked by a hacker going by the name of Oleg Pliss.

Word of a hack locking iPhone, Ipads, and desktop as well as laptop devices has spread through many other countries, but most devices in the United States have not been affected at this time. The hacker goes by the name of “Oleg Pliss”, the same name of a person who claims to be a Senior Software Engineer and Computer Scientist at Oracle/Sun Microsystems Inc.

The Victor Valley user stated that sometime between midnight and 4:15am his IPhone was hacked causing it to lock and show the message “Hacked by Oleg Pliss. For unlock device YOU NEED send voucher code by 100$/eur on of this (Moneypack/ukash/Paysafecard) to helplock@gmx.com I send code 2431402312”.

Many, mostly Australian users were woke up at 4:30 a.m. by the alert that came with this message. Most affected at this point have been in Australia, although some instances have also been reported in the New Zealand, London and Canada. The devices were not only hacked, but many found that there was a password added to their device through the “Find My iPhone” section in Apple’s iCloud, which requires the password to restore the device.

The Find My iPhone feature was created to help users locate their lost or stolen devices. When the device is located, users can lock their device using their password or a newly created password also allowing them to display a message of their choice to the screen. Restoring the device to factory settings was reported to work for some users, but should contact Apple Care for the most accurate advice.

All owners of Apple Devices are urged to add a password to their devices to prevent possible future hacker attacks. To contact Apple support and service call 1-800-275-2273 or for Apple iPhones call 1-800-694-7466.