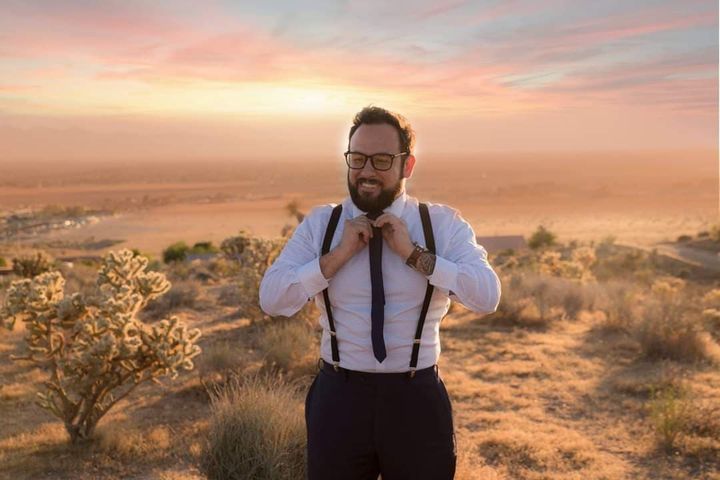 We mournfully announce the passing of Anthony Rhoades, 37, of Hesperia, CA. Anthony was born on January 23rd 1984 in Pomona, CA, to Rhoda Rhoades and Ralph Felix. In his early years, Anthony grew up, side by side, with his cousin Jeremy. The two, more like brothers, would spend time after school with their Grandma Mary. Summers were spent in Michigan with Grandpa Ken and Grandma Carol. Even at a young age, Anthony’s intelligence was apparent. If there was a lull in the day, Anthony would sneak under his grandpa’s desk and declare he was bored. It seemed, even then, that Anthony desired constant movement and mental stimulation.

In 1998, Anthony’s mother moved him and his sister, Andrea, to Hesperia. Anthony quickly adapted and began to flourish. He played sports in high school excelling in JV football and varsity wrestling. His natural ability to learn placed him as one of the first participants in Avid at Hesperia High School. And while intelligent, he was always approachable. His down-to-earth nature, and innate desire to see the good in people and situations lovingly earned him the vote for the title of “most gullible” in his class.

Anthony was always someone his family could rely on, often putting his own desires behind those of others. Growing up he always looked out for his sister Andrea. He once took the money he earned from his part-time job to buy her a video game console just so they could play together. In early adulthood, Anthony became a father. The birth of his son Aiden immediately motivated and inspired him to pursue his passions of education and community service.

Anthony graduated in 2014 with a Bachelor’s in Political Science from the University of California Riverside. By then he had already embarked on his political aspirations; running for seats on various councils and even taking a run at State Assembly. He was never deterred from his goal of making impactful contributions to the community he loved. He continued his education, graduating with a Master’s degree in Public Administration in 2019 from Arkansas State University. He then began pursuing his Doctorate in Public Administration at Cal Baptist University. Anthony’s memory shines bright for those that knew and loved him. They carry with him his love of life. He loved his community. He loved suits, music, and the Rams. He loved seeing how things worked and keeping busy. Above all, he loved his family. And while they mourn his loss they feel blessed that God gifted him into their family. They feel comfort knowing that they will see him again when they are reunited in heaven.

Fond memories and expressions of sympathy may be shared at www.desertviewcares.com for the Rhoades family.

Related Topics:Anthony Alexander Rhoades
Up Next