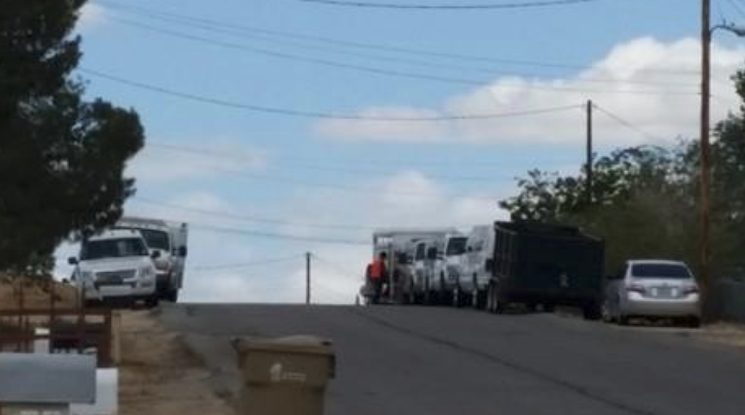 [googlemap src=”” align=”alignright” ]HESPERIA: (VVNG) – On Wednesday, May 21st at approximately 11:30 a.m., Hesperia Animal Control as well as police and ambulances went to the  home of an elderly woman located off Deodar Street and Peach Avenue in the city of Hesperia. Animal Control officials were made aware of possible animal hoarding by a complaint made to their office.  Animal Control officers had been keeping an eye on the property since the report but, up until today had taken no drastic measures to check the validity of the report or to enforce animal hoarding laws.

The animal control officers were said by an on scene witness, to be taking turns going into the home in Hazmat suits. Those exiting the property were doing so with their boots covered in animal feces. According to the witness’, the hoarding in this home is not just limited to that of animals, there is a lot of debris that the officers had to search through in order to find any hidden animals.

Rachel Molina, the city of Hesperia’s Public Information officer stated, “There is not much information I can give at this time since it is an open case but there were 27 cats and 21 tortoises picked up from the property. The health of these animals is still unknown since they have only been in our possession for only  a short time now.”  The health of the animals should be available late this week or early next week, we will update that information when it becomes available.