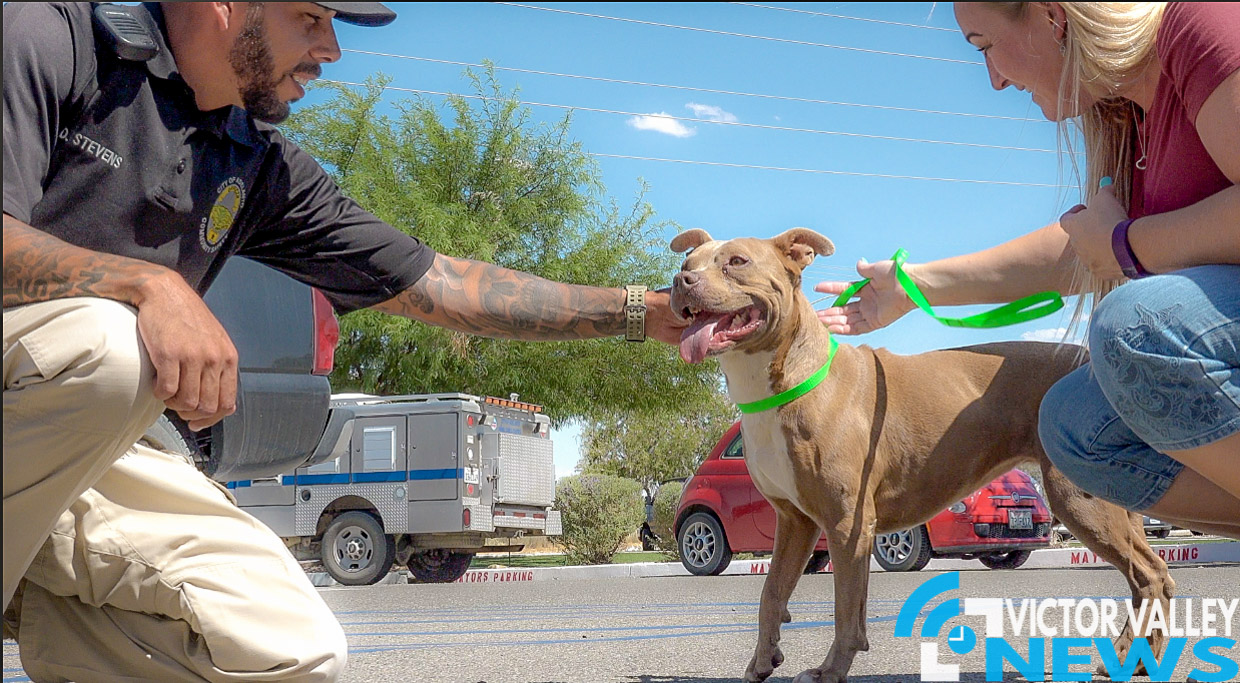 ADELANTO, Calif. (VVNG.com) Animal Control Officer Derek Stevens said the “blessing of the job” is being able to reunite pets with their rightful owners, and today was one of those blessed days when he reunited a dog after four years of being missing.

On Tuesday, August 22, Stevens picked up two dogs in the city of Adelanto near Bellflower and Alexandria Streets after being found by a good Samaritan on Sunday.

Stevens took the dogs back to the office and scanned them for a chip, but only one came back registered.

“I was able to scan it and get the owners information, which luckily was still a valid number, and I contacted the owner and let her know I had the dog in my possession,” Stevens told Victor Valley News.

Michelle Ganz was on the receiving end of that phone call and told Stevens that all her dogs were accounted for and she didn’t have any missing pets.

“He said he scanned the dog and it came back micro-chipped to me and he [asked], “none of your dogs are missing?,” and I said no. Then it dawned on me that almost four years ago our dog was stolen,” Ganz said.

When Ganz gave Officer Stevens the description of her dog Bella, a pit bull mix who was only 8-months-old when she was stolen in November of 2013, she was overwhelmed with joy when it was a positive match.

Ganz said she always told her son Michael to never lose hope of seeing Bella again, but admitted that hope began to fade as the months went on.

“We had lost my mom in September of that year, then my dog two months later, so it was a huge devastation,” Ganz said, as she recalled Bella being her son’s comfort as he grieved his grandmother’s death.

As Officer Stevens brought out Bella from the back of his truck, Michelle and her daughter ran to greet their long-lost family member, who was now an adult canine.

Ganz said Bella looked like an “old lady” compared to the puppy they remembered but was grateful she was back in their lives.

“She seems to remember us and is starting to respond to her name again,” Ganz said in an update hours after the reunion.

“The number one thing that caused this reunion to happen was the micro-chip that was inside of the dog,” said Stevens, “a collar can come off, but the chip is always there, that’s why I recommend it.”

Stevens has been working for the Adelanto Animal Control for almost a year, and although he may encounter the not-so-positive side of the job at times (dead or neglected animals, etc.), he said it’s days like today that make it all worthwhile.

“It’s the blessing of the job. There’s not always positivity that comes out of it, but there is some that come out periodically, and this is definitely one of those times,” Stevens said.

Police ID man who barricaded himself in Spring Valley Lake

Police investigate shooting on B street in Victorville