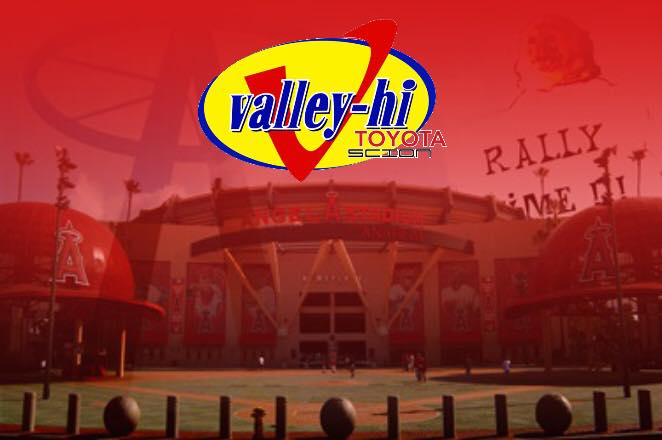 Norma Jean was the lucky winner of the Opening Day Dodgers Tickets.

(VVNG.com)- Valley Hi Toyota is at it again! On the heels of a successful, innovative way of giving away Opening Day Dodgers tickets on Facebook, the Victorville dealership is betting there are just as many, maybe more Los Angeles Angels of Anaheim fans than Dodger blue boosters.

“I was getting a lot of complaints of people saying. ‘why don’t you give away Angels opening day tickets?’ so we decided to give homework assignments to those fans,” says Todd Stokes, General Manager at Valley Hi Toyota.

Last week, Dodger fans were given tasks to perform to indicate how much they really wanted to attend the Dodgers home opener on Monday, April 6th, against the San Diego Padres.

“We asked them to prove how much they knew and cared about the Boys in Blue,” said Brian Ortega, social media manager. “We wanted to have fun with the community and engage with them even more on Facebook. We had such an overwhelming response, it was a no-brainer to offer opening day tickets to die-hard Angel fans.

Starting Friday, April 3-April 7, Halo fans will be given homework assignments to find the person who rallies the most for the Angels. “With the Dodgers contest, we had a lot of people start off strong, but failed to turn in all of their assignments. But because Angel fans were able to see how the contest is relayed, we’re thinking more people will complete their tasks,” said Brian Ortega.

Participants are encouraged to ‘Like’ Valley Hi Toyota to be aware of the many contests and giveaways they hold for the community. They are on Twitter @valleyhitoyotas and Instagram @valleyhitoyota. Angels opening day is on Friday, April 10th, against the American League Champions Kansas City Royals. A Fireworks show will follow the conclusion of the game.

“This is a great opportunity for a lucky fan and a friend to experience an Opening Day game, where ticket prices are a lot higher than the regular season. It’s also a way to see 2014 American League MVP, Mike Trout try to lead the Angels to Freeway World Series!”