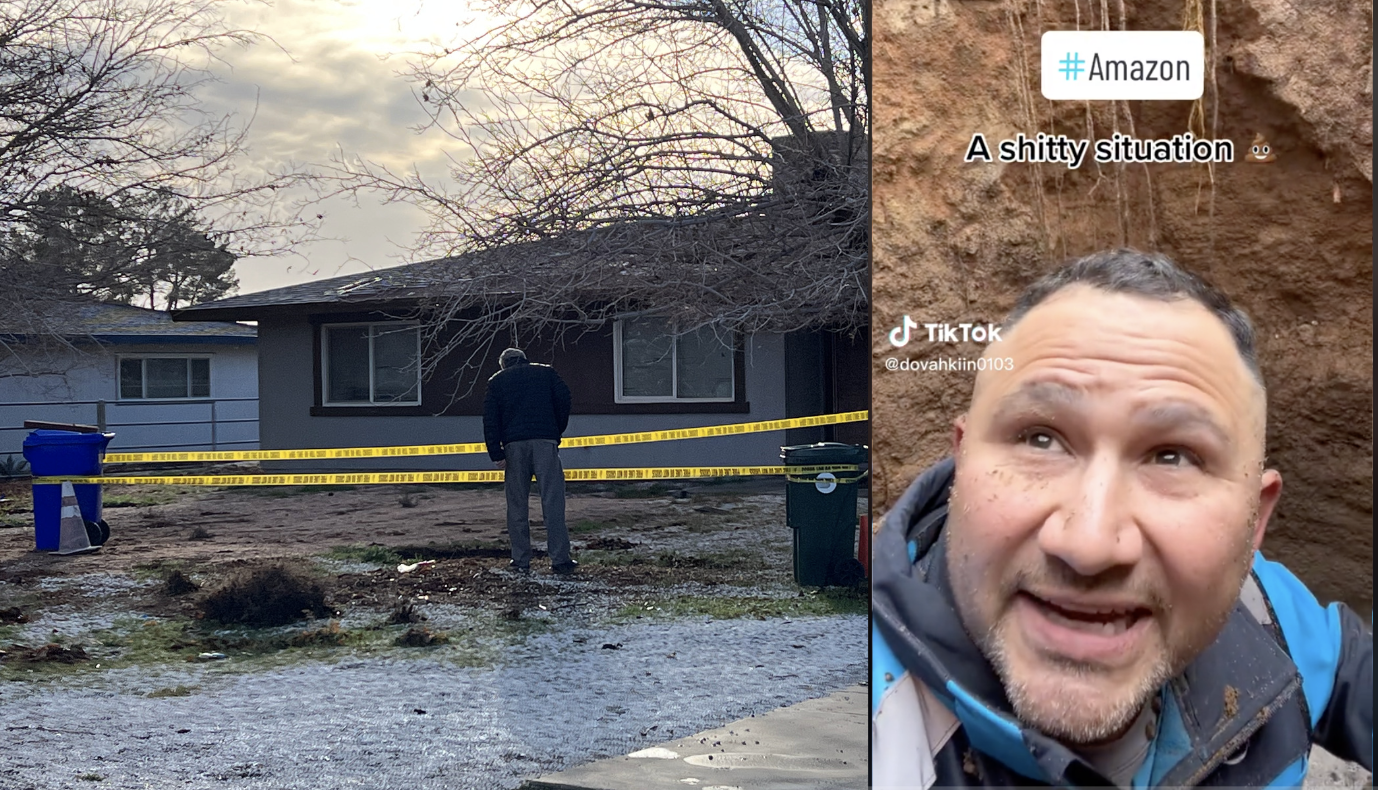 APPLE VALLEY, Calif. (VVNG.com) — An Amazon driver was rescued after the ground beneath him gave way while he was delivering packages in the Town of Apple Valley, causing him to fall into a septic tank, 6 feet below ground.

Heavy rains weakened the ground, causing it to collapse right from under the delivery driver’s feet as he walked up to the residence.

“I tried using these roots around me to get out, and they just pulled more dirt on top of me, so I just called dispatch,” the Amazon worker said in a self-recorded video he took while he was standing in the sludge.

After the worker attempted to climb out on his own, the soft walls began to crumble, prompting him to call for a rescue.

Once the call for assistance went across the scanner, a nearby San Bernardino County Sheriff’s Deputy with the Apple Valley Police Department arrived within minutes.

The deputy found the Amazon worker in a hole located in the front yard of the Apple Valley residence standing knee-high in the swampy sewage inside the septic tank.

Firefighters with the Apple Valley Fire Protection District arrived on scene, and they were able to place a ladder down the hole, stabilizing the dirt wall, and allowing the Amazon delivery driver to climb out safely.

He later posted his video to TikTok, along with two follow-up videos, gaining over 10 Million views on the social media platform.

In the follow-up video, the driver said he went home and showered after the incident, then went back to finish his shift.

@dovahkiin0103 Walked past a hole while delivering to a customer’s house when it collapsed and took me with it! #baddayatwork #amazondspdriver ♬ original sound – Charles Amicangel945

He said he had about 100 stops left before his shift was over, however, his employer Amazon lightened his load, and sent a driver to him to take 50 of his packages and to help deliver them.

The hole in the front yard was secured with yellow tape. A person from the residence was at the scene as well, speaking with rescue personnel, it’s unclear if they were home at the time of the incident.

No other injuries were reported.

The AV Fire Department said if the man continued attempting to self-extricate from the hole, the dirt around could have collapsed, causing him to become buried under the dirt.

Related Topics:amazonApple Valley
Up Next