(VVNG.com)- CHP responded to a multi vehicle traffic collision on the northbound 15 freeway north of the Zzyzx Road off-ramp. The accident was reported at 7:59 P.M., on Saturday, July 25, 2015.

Victor Valley News member, Dreya Albergottie, witnessed the accident and commented the following, “just experienced the most horrific accident. On our way to Vegas a guy racing and cutting people off at a diagonal direction (because there was no room to go over), just took out 4 other people and impelled his car on a tree…. I just can’t say enough… Slow down and stop cutting people off!! Hug and kiss your loved ones tonight.”

According to CHP incident logs, a gray Chevy Monte Carlo was driving recklessly prior to the collision. Upon arrival, officers located the Monte Carlo crashed into a tree. The male driver was on the ground next to the vehicle. His injuries are currently unknown.

The Monte Carlo collided into a blue Nissan Versa, causing the vehicle to leave the roadway and crash into a barbed wire fence. The driver sustained head injuries. According to a witness, for unknown reasons the airbags in the vehicle did not deploy. The third vehicle, a black Honda was rear ended causing the vehicle to go into the center divider. A fourth vehicle was also involved in the collision. No information is currently available on the make or model.

“He was cutting everyone off (the driver of the Monte Carlo). He almost took us out 2 times and just looked angry when he was next to us right before cutting us off the 2nd time. His car is facing the wrong direction, stated Dreya.

As of 8:17 P.M., the No. 2 lane was shut down. Two of the vehicles were not drivable and were towed away from the scene. 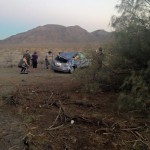 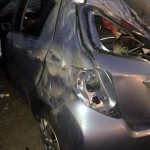 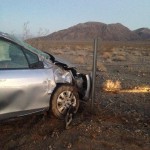