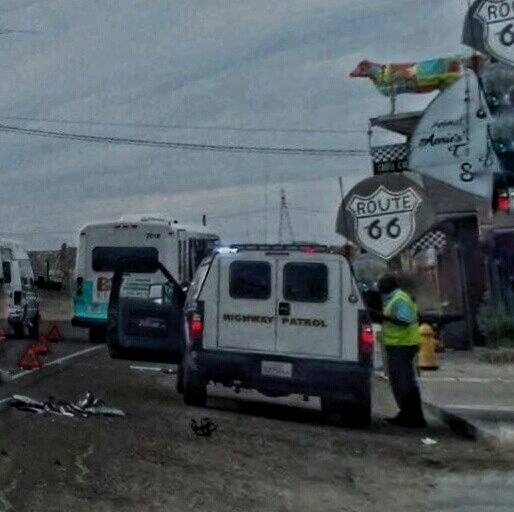 ORO GRANDE:(VVNG.com)- The California Highway Patrol responded to a traffic collision involving a vehicle and a Victor Valley Transit Authority (VVTA) bus on the 19200 block of National Trails Highway.

The collision occurred on a two lane highway in front of the Cross Eyed Cow Pizza in the town of Oro Grande, on Wednesday, July 1, 2015 at approximately 6:31 A.M.

Witnesses stated the female driver of the Prius crossed over into oncoming traffic and side swiped the transit bus.

The executive director for VVTA, Kevin Kane, told a Victor Valley News reporter, the bus driver was returning from Helendale to Victorville.

“After she was hit she avoided a fire hydrant and a building that she was veered into, she did a terrific job handling the bus after she was struck,” stated Kane.

According to authorities, the 26-year-old female driver of the vehicle was taken into custody on suspicion of driving under the influence.

Neither driver or the four passengers on the bus were injured as a result of the collision.