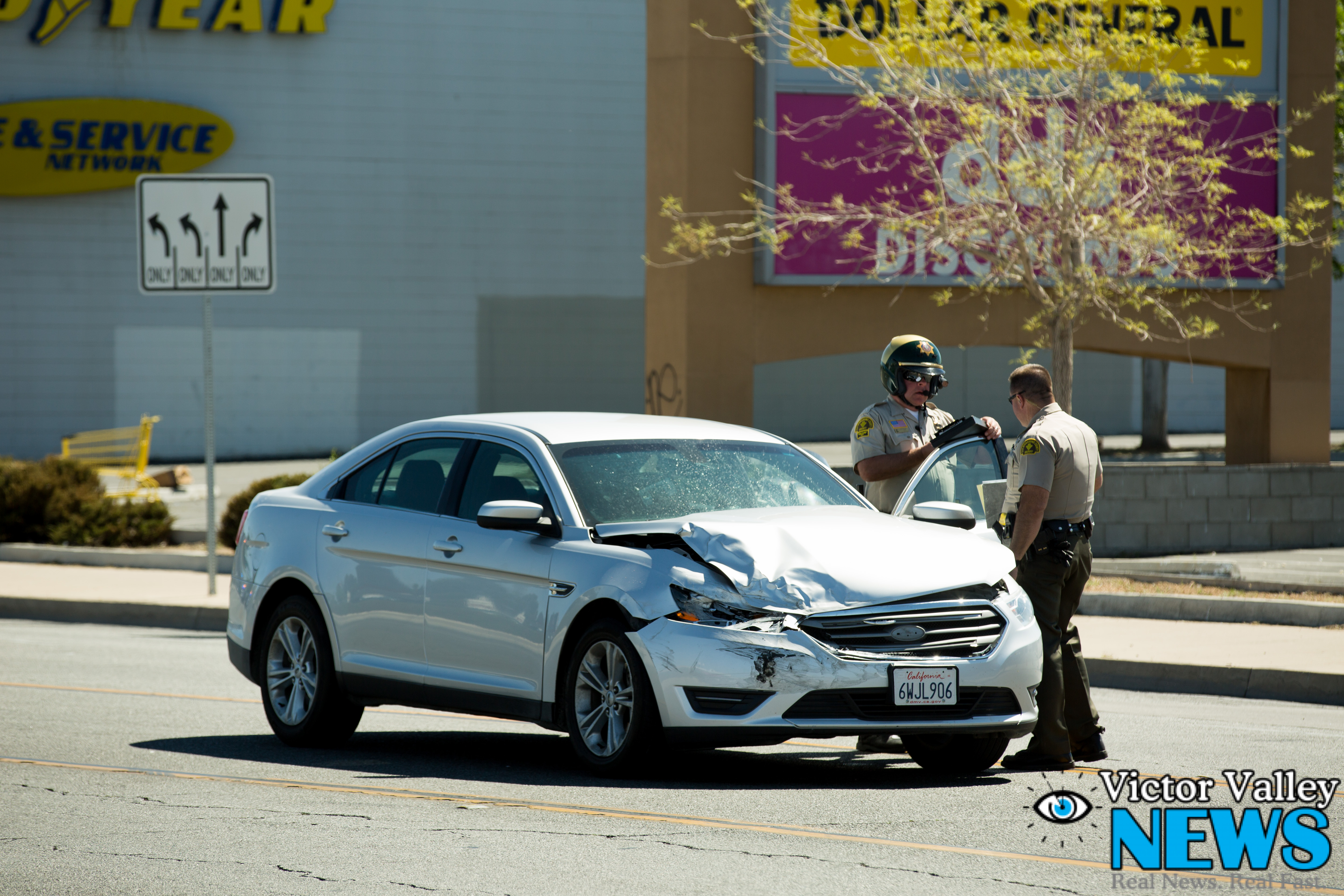 VICTORVILLE– (VVNG.com): Two suspects involved in a previously reported carjacking incident were involved in a short high-speed pursuit that ended in a multi vehicle traffic accident in Victorville.

It all started on Friday, March 27th at approximately 11:15 A.M., when dispatch received a call reporting a carjacking in the Cinemark movie theater parking lot on the 12300 block of Mariposa Road.

Per scanner traffic, two black males armed with a handgun carjacked the victims 2001 black Ford Mustang. After a brief search the victims abandoned vehicle was recovered less than 3 miles from the carjacking, in the Food 4 Less parking lot in the 16200 block of Bear Valley Road.

As the victim was being interviewed in the Cinemark parking lot, in the 12300 block of Mariposa Road a vehicle drove by matching the description of the second vehicle that the victim believed was involved.

The victim pointed out a silver Ford Fusion vehicle out to the deputies conducting the interview, which initiated a pursuit. The vehicle drove at high speeds, at times reaching 100 MPH through city streets with no regard for the safety of himself or those around him.

The vehicle was pursued by deputies and subsequently, when making a left turn from Seventh Street to La Paz Drive crashed into a white pickup truck causing the truck to crash into a white SUV. The occupants of those vehicles were not seriously injured.

After the crash, the suspects continued to drive a couple hundred feet before stopping vehicle in the turning lane of La Paz Drive and fleeing on foot through the parking lot of a busy near by shopping center.

“I don’t know what just happened on Seventh st. and La Paz, but I was in store and I heard a bunch of sirens. As I approached door to leave, the clerks were talking about cops running with guns. Then I see cops running in DDs parking lot and the street with guns drawn! Then I see silver car in middle of street that had damage and was starting to smoke,” said Victor Valley News Member, Tina Marie.

After a brief foot pursuit, the suspect was quickly taken into custody. At this time, there is no further information on the suspect or regarding his involvement, if any, with the earlier carjacking.