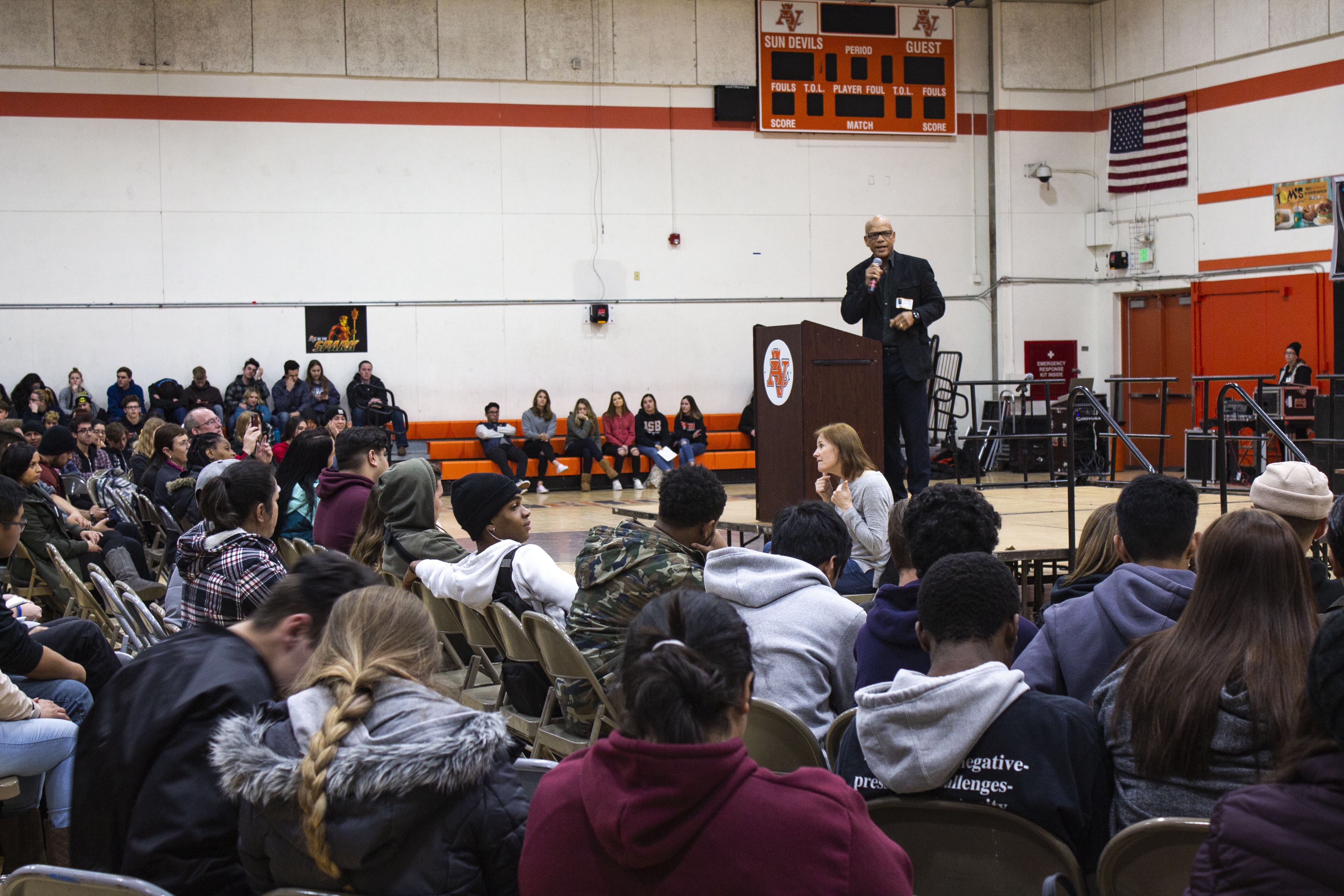 APPLE VALLEY – Every senior who graduates from Apple Valley High School and chooses to attend Victor Valley College this year will receive a $1,600 scholarship, courtesy of the new AVHS Alumni Scholarship.

The class of 2019 was gathered in the school gymnasium Thursday morning for an assembly that announced the scholarship, featuring a lineup of guest speakers from VVC.

“We are here to tell you that this is a wonderful opportunity for you. Studies show that people who go to community college and complete a degree are going to make, on average, twice as much money as someone who just goes to high school and doesn’t pursue a higher education,” said VVC Superintendent/President Dr. Dan Walden. “Community college worked for me, I’ve seen it work for thousands, and I hope you’ll take this opportunity that this wonderful donor made available to you.”

The donation was made by an alum of both AVHS and VVC and will be given to the VVC Foundation, the primary organization through which the community invests in the college. A $1,600 scholarship is offered to the entire graduating class this year, which is about 540 students. During the assembly Thursday, faculty from various departments of the college spoke about the programs available to students, including Biology, Nursing, Emergency Medical Services, Fire Technology, Construction Technology, Welding and Speech Communications.

“In 16 weeks at VVC we can send you into the workforce studying medicine,” said Christi Myers, VVC EMS Academy Faculty and an alumna of AVHS. “But I’m also here to encourage you to explore, because EMS is not for everyone, hence the reason you’re presented with so many opportunities … You have to do what you love, because if you do what you love, you’ll never work a day in your life.”

Nursing professor Terry Truelove told students that VVC’s nursing program is ranked one of the best in California by several surveys, including RegisteredNursing.org, which ranks it as No. 4 and praises it for producing graduated who are “ready to work.” “They had me speak today because I have a typical background as many of you do —  I was born brown in the city of Los Angeles and poor,” said Truelove, who has been a registered nurse for 32 years. “I didn’t know what I wanted to do either, but because I went to a community college, I am in the most trusted career field in the country … I live very comfortably now and you can too.”

Dr. Gregory Jones, a communications studies professor at VVC, asked the students to think about the best apps they have on their phone and told them that he knew of an app that could surpass all others.

“This app opens doors, creates positive impressions, demands respect, increases your income and facilitates anything you want to accomplish. This app will not appear on your ,” Jones said. You can’t buy this app. It’s not for sale … But you can earn it. Thanks in part to the generosity of your community, there is an app with your name on it at VVC just waiting for you to open it. Come and get it.”

The AVHS Alumni Scholarship available to this year’s graduates will allow them to attend VVC for free for at least the first year and possibly two.
The hope is to have continued support for the scholarship in coming years. Many of the speakers Thursday are AVHS alums, including Christi Myers, VVC Director of Admissions and Records Greta Moon, VVC Construction Technology Department Chair Anthony Bonato and Apple Valley Town Council member Kari Leon.